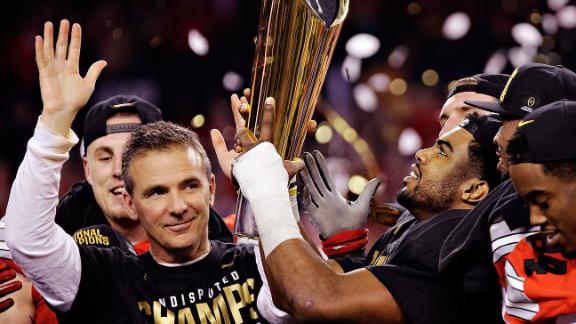 Officials from the College Football Playoff are standing firm behind their original dates for future semifinals and national championship games in spite of a report that officials from ESPN and the NFL would like to see the dates changed.

The Sports Business Journal reported that ESPN executives have lobbied to move next season's semifinals from New Year's Eve, when they could suffer a drop in ratings, to Jan. 2, 2016.

The 2015 semifinals -- to be played at the Capital One Orange Bowl and the Goodyear Cotton Bowl -- are scheduled for Dec. 31. The NFL's 2015 regular season concludes Sunday, Jan. 3.

Part of the playoff's 12-year contract was to hold tripleheader bowl games, including the semifinals, on New Year's Eve and New Year's Day.

"We understand and appreciate their interest in this," CFP executive director Bill Hancock said in a prepared statement. "The fact is that we have started a new tradition of back-to-back tripleheaders on New Year's Eve and New Year's Day. We're not interested in changing for one year, then returning for the next 10. This event has been very well received and we are excited about the future and about enhancing the concept of a 'holiday within a holiday' on New Year's Eve and New Year's Day."

The NFL could make that difficult.

ESPN owns rights to both the College Football Playoff and the NFL "Monday Night Football" series.

"We completely support the New Year's scheduling connections for the College Football Playoff throughout our 12-year agreement," an ESPN spokesperson said in a statement. "For the one year in 2016 when the calendar falls a certain way, the idea was to consider moving the games from Thursday, Dec. 31 to Saturday, Jan. 2 to allow for a more accessible, fan-and participant-friendly experience for all. It's strictly a one-year concept."

Hancock told the Sports Business Journal that Monday night was the best day of the week for the CFP title game.

"We announced that in June 2012," Hancock told the publication. "We established that our game was going to be on Monday night for 12 years."

Citing sources, the Sports Business Journal reported that NFL commissioner Roger Goodell initiated a series of high-level meetings with some of the CFP's most influential commissioners to discuss the potential impact an NFL playoff expansion would have on the national championship.

According to the report, Goodell told the college commissioners that any playoff expansion likely would put a wild-card game on Monday night.

A Monday night wild-card playoff game wouldn't run up against the CFP championship game for at least two more years.

The timing of everything is critical, as playoff officials are aiming to send out bids the week of Feb. 9 to cities interested in hosting the national championship game in 2018, '19 and '20.

Citing sources, the Sports Business Journal reported that ESPN's contract with the playoff requires the games are televised on ESPN -- not ESPN2 or ESPNU. The report also cited cable sources that said some of ESPN's affiliate deals contain language that would prohibit the network from putting either the CFP championship or an NFL playoff game on ABC.

Another option is for the NFL to sell a Monday night playoff game to another network. The CFP championship game on Jan. 12 averaged 33.4 million viewers, becoming the first show in cable TV history to top 30 million viewers.