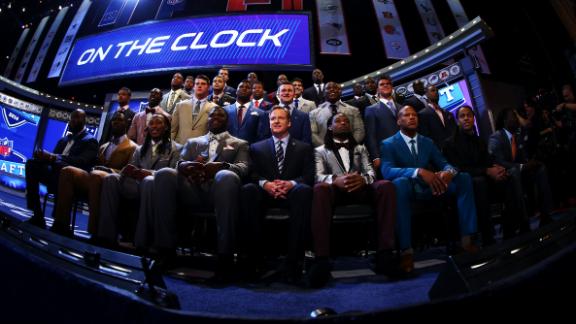 The NFL draft is on the move.

NFL spokesman Brian McCarthy said Thursday that the league is "focusing" on New York City, Chicago and Los Angeles as possible locations for the 2015 draft, although sources tell ESPN's Adam Schefter that scheduling issues have made New York City -- the regular home of the draft -- the least likely option.

Radio City Music Hall, the usual host venue, will not be available next year, and the NFL is looking at Madison Square Garden as an alternate site, according to sources. However, with the New York Rangers and New York Knicks both playing there, scheduling the three-day draft would be challenging.

The same goes for the Barclays Center, home of the Brooklyn Nets.

The NFL met Friday to go over potential sites. Other cities under consideration include Dallas, Houston, Nashville, Pittsburgh, Philadelphia and Boston. Each city has been asked to provide as much information as it can to the NFL by the middle of June, with the NFL hoping to make a decision by the end of the month.

Also, McCarthy said the league likely will move the draft back to a late April date, with possible spillover into early May.

This year's draft was held May 8-10, a couple of weeks later than it had been traditionally been in the past.

Multiple teams told commissioner Roger Goodell that they felt rushed by the change -- not so much for the added buildup, but for the lack of time on the back end of the draft, as they want more time to be able to get their rookies ready and build their rosters.

Information from ESPN's Adam Schefter was used in this report.

NYC Back to School: Working out staffing and other hiccups