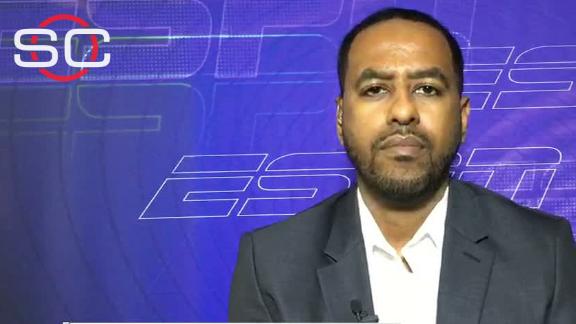 Saying "little setbacks happen," Chris Bosh vowed on Friday night to continue his comeback to the NBA without specifically addressing what had caused him to fail a preseason physical with the Miami Heat.

Speaking in a videotaped segment published online, Bosh called the news "a down moment right now" while pledging that everything would work out.

"I had the intention of releasing Episode 2 of 'Uninterrupted: Bosh Rebuilt' today under the assumption I would be cleared to go for camp," Bosh said in the video. "Unfortunately that is not the case. But that doesn't stop me from wanting to share my creative side with you guys and hoping that you want to come along on the journey with me."

The Heat said earlier Friday that Bosh would not be allowed to participate in their preseason training camp after failing a physical. The Heat declined to explain why Bosh failed the physical and cited a clause in the collective bargaining agreement that prohibits the team from releasing certain medical information.

So it wasn't clear if Bosh's problem was a new issue or the same one that caused Heat doctors to inform him his career was likely over six months ago.

"Just because the journey has ups and downs doesn't mean I will stop sharing with you guys," Bosh said. "So I will just continue to share despite what's going on."

Team president Pat Riley and managing general partner Micky Arison have both said in recent weeks that they would be open to having Bosh in camp, and the 11-time All-Star forward was examined by multiple doctors in recent days in an attempt to be cleared.The team will host media day in Miami on Monday and will start training camp in the Bahamas on Tuesday. It also remained unclear whether Bosh would be present for those events.

"Little setbacks happen. But that doesn't change my intentions and what I want to accomplish," Bosh said. "So I hope you continue to watch. I hope you continue to just take in my journey and just come along with me with the ups and downs. So it's a down moment right now, but everything's going to be all right."

Bosh faced the first of two bouts with blood clots in February 2015. One that was believed to have formed in one of his legs traveled to a lung and caused problems so severe that he needed to be hospitalized for several days. He recovered and was averaging 19.1 points last season when the second bout with clots began in February -- though the ones discovered then did not cause health issues anywhere near as serious as what he dealt with in 2015.

"The Miami Heat and Chris Bosh, in consultation with team doctors and other physicians, have been working together for many months with the mutual goal of having Chris return to the court as soon as possible," the team's statement from earlier Friday said. "Chris has now taken his pre-season physical. The Miami Heat regret that it remains unable to clear Chris to return to basketball activities."

Information from ESPN's Brian Windhorst and The Associated Press was used in this report.