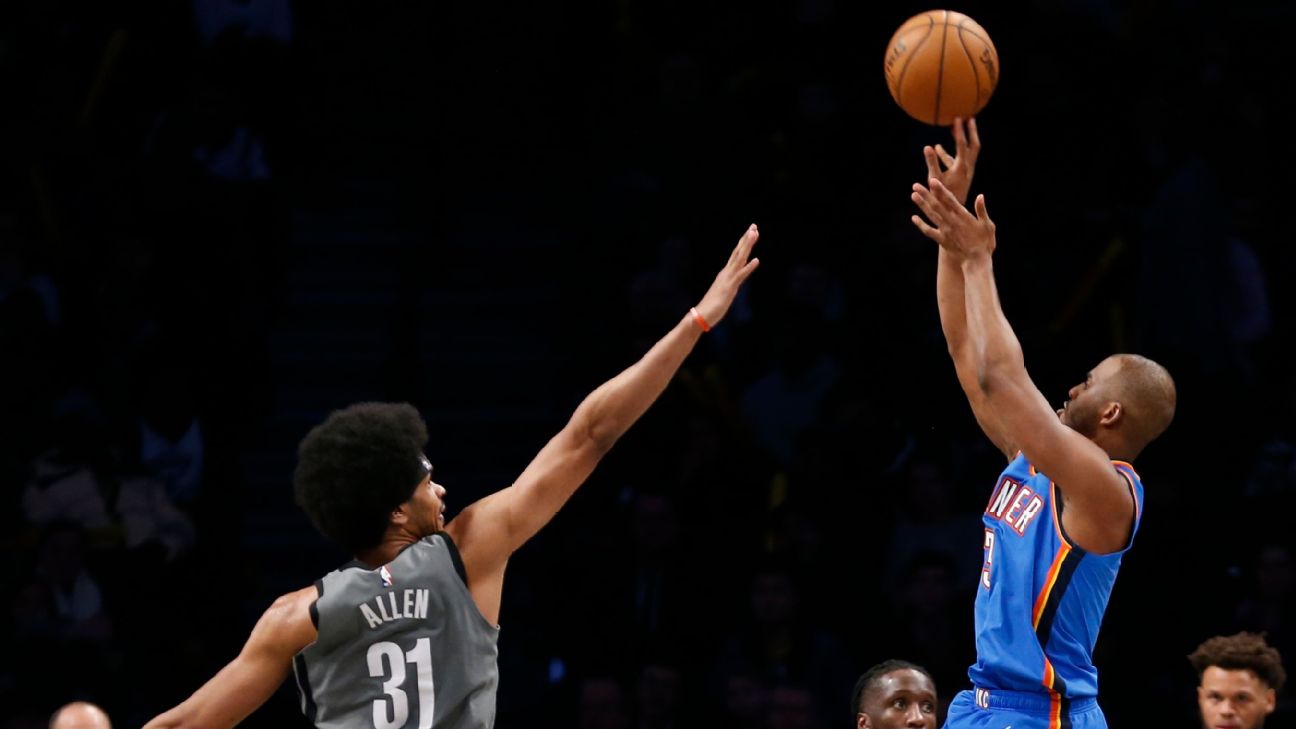 NEW YORK -- TheOklahoma City Thunderwere down by six when Chris Paul took over.

Brooklyn'sJoe Harris, who was defending Paul, got caught on aSteven Adamsscreen. Bang. Paul splashed in a jumper from the top of the key. With 50 seconds left in regulation, Paul pulled up again and dropped in another jumper. Tie game.

The Thunder would go on to beat the Nets 113-103 in overtime. Paul outscored the Nets 12-11 in clutch time (the score within five points in the final five minutes of regulation/OT) on Tuesday night.

After the game, as reporters wondered aloud if Paul was aware of his impressive clutch statistics, his teammates teased him, pulling out their cellphones and feigning paparazzi.

"I am probably very low in the league on shot attempts at the rim," Paul joked.

That's why, Paul went on to say, when he and Dennis Schroder get to the elbow, they call it a layup - a nearly guaranteed basket.

"That's our version of a layup," Paul said.

Paul finished with 28 points, six rebounds and three assists. Oklahoma City now has the best record in the Western Conference (15-5) since Thanksgiving.

The Thunder won their 11th game of the season in which they trailed their opponent entering the fourth quarter. No other team has won more than six such games, according to ESPN Stats & Information research.

Meanwhile, the Nets continue to slide. Shai Gilgeous-Alexander and Schroder were successful guardingSpencer Dinwiddie, holding Brooklyn's starting point guard to 3-of-13 shooting when they were defending him.

The Nets' seven-game losing streak is the longest active skid in the NBA right now.

"It's not a good feeling to drop a game we definitely could've won," Dinwiddie said after the game.

In addition to guarding Paul, Brooklyn knew that a potent game from its centers would be necessary against Oklahoma City. In bold type near the top of the Nets' scouting report on the Thunder is Adams' dangerous rebounding ability. Adams' name appeared twice on the "Top Plays" pamphlet players were given before Tuesday's game.

But understanding and executing are two different things. Adams finished with 18 rebounds.

"When he does that, it is pretty impressive," Thunder coach Billy Donovan said of Adams. "He gives such effort. And for him, with his size coming off a back-to-back, he does a great job."

Jarrett Allen slammed down two bench-clearing, one-handed dunks that elicited collective oohs from the crowd. He also snatched up seven rebounds. DeAndre Jordan put up eight points and collected 10 rebounds, but their collective rebounding efforts couldn't match Adams. Paul's experience under pressure proved to be too much.

OKC outscored Brooklyn 28-13 in the final 13 minutes of regulation and overtime. In that same stretch, Brooklyn's accuracy waned. The Nets shot just 20.8% from the field, whereas Paul and the Thunder shot 52.9%.

"Even when we were losing games," Hamidou Diallo said, "we still knew that we had that extra push and we still had that fight. But to come here and battle it out and get that win in the fourth and then in overtime, that's really big." 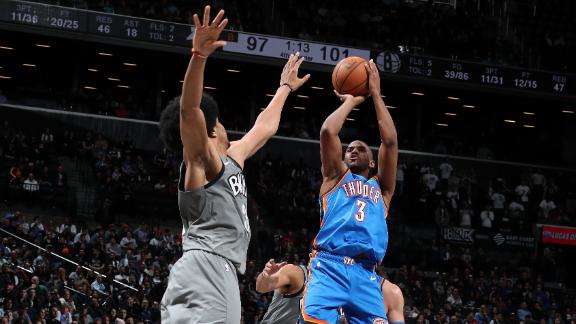