Clippers staying with DeAndre Jordan until he can sign, sources say 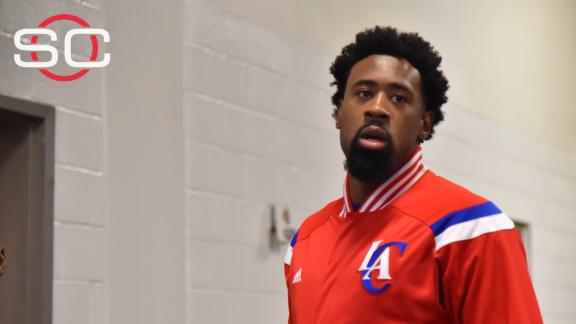 DeAndre Jordan has told the Los Angeles Clippers that he wants to walk away from his new deal with the Dallas Mavericks to stay in L.A., according to league sources.

But sources told ESPN.com that the unprecedented fluidity of Jordan's free agency has convinced the Clippers that they need to stay at Jordan's side until he can formally sign a new contract, given that Jordan has already changed his mind once in this process.

Sources say Jordan, in a Wednesday meeting at his Houston home with several Los Angeles teammates and top team officials, left the Clippers with the clear message that he intends to renege on Friday's commitment to sign a four-year, $80-plus million max deal with the Mavericks and re-sign a lucrative deal with the Clippers instead.

Jordan has not responded to any of the Mavs' attempts to contact him Wednesday, including phone calls and text messages, and sources say Mavericks owner Mark Cuban has begun to notify people within the organization that Jordan will be staying with the Clippers.

With roughly 90 minutes to go before the moratorium is lifted and Jordan can sign with the Clippers, Dallas still had not heard directly from Jordan since Tuesday.

Sources say the majority of the Clippers' contingent that descended en masse on Houston to get Jordan back -- which included coach/team president Doc Rivers, owner Steve Ballmer, and star teammates Chris Paul and Blake Griffin -- remained at Jordan's house after the conclusion of the meeting. The Clippers' contingent, sources said, is vowing to stay with Jordan until at least 12:01 a.m. ET Thursday, which is the first allowable minute that Jordan can officially sign a new deal with L.A.

The meeting didn't last long, a source said. They talked about their issues and then the atmosphere changed to resemble a locker-room scene, including cards and video games.

A Clipper source said Jordan initiated this a few days ago.

"He reached out to us and said I changed my mind. There was no convincing here," the source said.

Another source who was in in the meeting said "It's done. I wouldn't have left if it wasn't."

Jordan was scheduled to leave on a 10-day Caribbean cruise Thursday.

Cuban and lead Mavericks recruiter Chandler Parsons, meanwhile, now fear they won't even get the chance they were expecting Wednesday night to try to pitch Jordan one more time before he makes his decision, given that the Clippers' traveling party has essentially refused to leave the All-NBA center.

Cuban and Parsons arrived Wednesday in Houston along with Jordan's primary agents from Relativity Sports -- DanFegan and Jarrin Akana -- who sources say were excluded from the Clippers' early evening meeting with their client.

Sources close to Jordan told ESPN's Chris Broussard he had become disenchanted with Fegan, believing he purposely misled Jordan and manipulated the situation to get him to go to Dallas.

Griffin made light of the situation Wednesday night via Twitter.

Earlier, sources said the Clippers were making significant process in their bid to persuade Jordan to reconsider his decision, with Jordan increasingly leaning toward a return to the team that drafted him and the Clippers optimistic he will stay in L.A.

Sources said Jordan reached out to Griffin and Rivers on Monday to say he had changed his mind about joining Dallas, prompting L.A.'s late push.

Free agents are traditionally considered off limits once they strike verbal agreements with teams during the NBA's annual moratorium period.

Paul was emotional during the meeting, a source in the room told ESPN'sBroussard. Paul told Jordan he had no idea he felt negatively about him and that he thought they were "brothers." Paul said he'd work to get Jordan more involved in the offense and that the Clippers couldn't move forward without him.

Cuban arrived in Houston on Wednesday as Dallas tried to fend off the Clippers' threat, sources said. The Mavs, sources said, had been promised another face-to-face meeting with Jordan at some point Wednesday before he makes a final decision.

Jordan informed both teams of his decision to join the Mavericks on Friday before flying to Houston. The Mavericks' hope was always to sign Jordan to his new contract formally Thursday, when teams and players can formally sign contracts once the leaguewide moratorium is lifted.

But now the Clippers, sources say, believe there is a real chance they will persuade Jordan to board a plane back to Los Angeles on Wednesday to sign a new contract with the team.

Before Jordan made the decision to join the Mavs, he and Griffin spoke several times. Sources close to the situation said Jordan was concerned about Griffin being traded in the next two years because the Clippers have continued to fail in the playoffs. He also had concerns about whether Griffin intended to stay with L.A. after 2017, when both Griffin and Paul can become free agents.

Jordan asked Griffin about his future. Griffin told him to make his own decision, sources said, and that he'd support him with whatever he decided. When Jordan called Griffin to tell him that he'd chosen the Mavericks, Griffin said he was happy for him if he was happy with his own decision. On Monday, though, Jordan called Griffin again and said he'd been having second thoughts about his decision over the weekend. Griffin urged him to call Rivers, who then began calling Clippers players and organizing a meeting Wednesday, in the hopes of getting Jordan to change his mind before the leaguewide moratorium ends at midnight.

Griffin flew to Houston on Tuesday to have dinner with Jordan, sources said.

Paul -- whose reportedly strained relationship with Jordan has been pinpointed as a factor in the center's initial decision to take Dallas' offer -- has been among those pushing hardest in recent days for Jordan to change his mind, sources said.

The NBA's moratorium period at the start of July every year is designed to allow the league to calculate the precise new salary cap and luxury-tax figures for the coming season. But teams and players are allowed to come to verbal agreements during the moratorium starting July 1. The first seven days of 2015 free agency produced a frenzy that has seen roughly 70 free agents come to terms on new contracts.

Information from ESPNDallas.com's Tim MacMahon was used in this report.

DeAndre Jordan having a change of heart?
Marc Stein reports the latest on DeAndre Jordan, who is reportedly considering signing with the Clippers instead of the Mavericks.