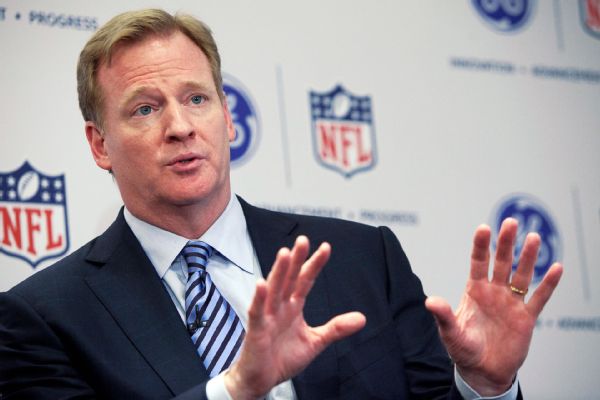 NFL ratings, which have been down significantly this season, have improved slightly since the U.S. presidential election.

While viewership is down 10 percent overall through the first 14 weeks of the season compared to that time span in 2015, that's four percentage points better than the collective broadcasts were down a little more than a month ago.

"It's an encouraging rebound," NFL commissioner Roger Goodell told ESPN on Friday. "I think it proves that the election was certainly a factor."

For the first nine weeks, NFL games averaged 15.5 million viewers, which was down 14 percent compared to 2015. But following the Nov. 8 presidential election, which took place two days before the start of Week 10, viewership has increased. During Weeks 10-14, NFL games averaged 18.1 million viewers, off just 2 percent compared to those weeks in 2015.

As Goodell noted in a memo sent to NFL teams in October, the league has been affected by the presidential election before. In 2000, the memo said, Fox games were down 4 percent, and ABC's 7. Even worse, CBS and ESPN were down 10 and 11 percent, respectively.

Goodell told ESPN that he doesn't blame all of the viewership woes this season on the political news cycle, saying he and the league's executives have for years looked into various ways to make the game more digestible to fans.

The average length of an NFL game is about 3 hours, 8 minutes, which hasn't changed substantively in the past several years, though the game might seem slower as the attention span changes due to the media landscape and social media.

"I'm a big believer that it's about the pace of the game, not the length of the game," Goodell told ESPN. "If you have a great game, no one is talking about the game's length. But pace is something we've been working on."

One of the first experiments the league will conduct, in cooperation with its television partners, is different times and lengths of ad breaks within every Week 16 games.

"We want to re-evaluate what commercial pods should look like," Goodell said. "Commercial breaks have been 2 minutes and 20 seconds for our entire history. Well, what happens if we try shorter breaks and put them in different places. It might be better for us, our fans, our television partners and even the advertisers. And it's not just a media exercise, it's about making it feel right to the fans in the stadium, as well."

"We've had instant replay reviewed in our central office for two years now," Goodell said. "In the beginning, there was a sense that it might be hard for us to have an integral role in all the games going on at one time, but there's more confidence now that we're in a position where maybe instead of the official coming to the sideline, we could have a (Microsoft) Surface tablet brought out to him and we could get in his ear and make the decision quicker."

As for the notion that games aren't competitive enough, Goodell says the facts don't back up that assertion.

"We're having our most competitive season since the early 1930s," Goodell said.

The league says the average margin of victory through Week 14 is 9.83 points per game, which would be the lowest for a full season since 1932 (9.13). Some 69.2 percent of all games played this season have been within seven points in the fourth quarter (144 of 208), which would be the highest percentage for a full season since 1935 (71.7 percent), according to the league.

Addressing those who say the decline in ratings is a product of too much football, Goodell says he doesn't see an issue with the quantity of games, including Thursday Night Football.

In fact, it's the rise in the Thursday Night viewership that partially helped the league rebound. Those games from Weeks 10-14, which also included a highly anticipated Kansas City Chiefs-Oakland Raiders matchup, were up 35 percent compared to 2015.

Big games certainly have helped ratings rebound from the 15.5 million average seen from Weeks 1-9, as have the success of the Cowboys, who at 11-2 are tied with the New England Patriots with the best record in football.

Networks that air Sunday day-time games have had the narrowest drops. Fox is down 4 percent in viewership, while CBS has seen a 7 percent decline.

While the league wants to provide fans with a way to see the best moments of games on social media, executives have been weary of letting them do too much, so as not to discourage fans from watching at all. This year, the NFL put limits on what teams can put out editorially within the games and required that highlights be pulled from the league's server.