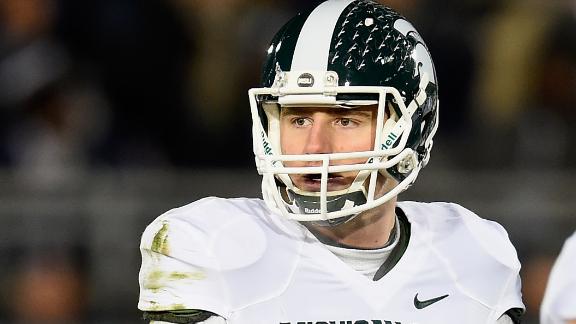 EAST LANSING, Mich. --Michigan Statequarterback Connor Cook says he has "unfinished business" that he would like to take care of and indicated he plans to be back with the Spartans as a senior.

Cook passed for 2,900 yards and 22 touchdowns in his first full season as Michigan State's starter this year. He played most of the 2013 season while leading the Spartans to a Rose Bowl victory.

"I have unfinished business that I want to accomplish next year," Cook said Tuesday. "I think the only way I can do that is if I return."

Cook told reporters in late October that he always intended to use all four years of college eligibility. He said then that he would stay at Michigan State unless "things go really well."

The Spartans lost to Ohio State a week later, dropping them out of contention for a spot in the inaugural College Football Playoff and effectively ending their chance to win a second consecutive Big Ten championship.

Despite leading the conference in passing yards and finishing second to the Buckeyes' J.T. Barrett in touchdown passes and quarterback rating, Cook wasn't considered a finalist for any postseason awards.

The 6-foot-4 Cook plans to return to an offense that will have to replace its leading receiver (Tony Lippett) and its leading rusher (Jeremy Langford) in 2015. Cook, who rushed for 69 yards this season, said he wants to learn to be more of a running threat and use his backs more often in the passing game in the future.

ESPN NFL Draft Insider Mel Kiper Jr. had projected Cook to have "a legit chance to go in Round 1" of the 2015 draft but with "no guarantee."

Defensive end Shilique Calhoun, another junior, said he is not yet focused on his decision on whether to turn pro.

"I would have to discuss that with my family, just how they feel about it," Calhoun said. "That's just something that's on the back burner."