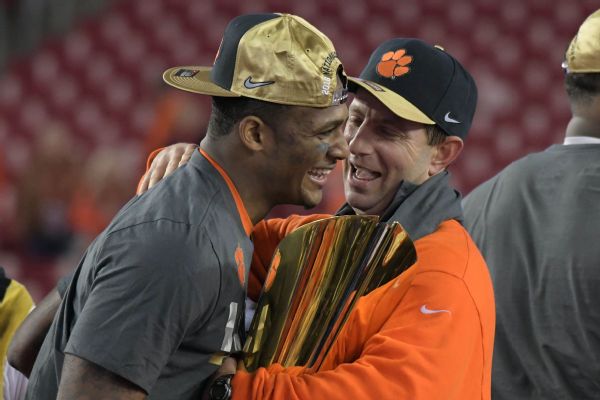 MOBILE, Ala. -- Clemson coach Dabo Swinney gave the ultimate endorsement Tuesday to his quarterback, Deshaun Watson, as he heads into the NFL draft process.

Watson elected not to participate in the Senior Bowl. He is a junior but has graduated, making him eligible for the game.

Watson, who led Swinney's Tigers to the national championship with a stunning 35-31 win over Alabama earlier this month, is one of the most highly debated draft prospects early in this year's evaluations.

A strong case could be made for the Cleveland Browns considering Watson as high as No. 1 overall because of his star power and proven ability to win on the biggest stage.

But draft analysts aren't as sold yet on the 6-foot-2, 210-pounder. ESPN's Mel Kiper Jr. said he has Watson rated as his No. 36 prospect overall -- but Kiper projected Watson to go No. 10 to Buffalo in his first mock draft, and said he could go even higher because of the value and need at the position.

Swinney, however, believes there should be no such debate.

"That's how you change things, you know, change a culture," Swinney said when asked specifically about Cleveland considering Watson at either No. 1 or No. 12 overall. "For me, it's through discipline and recruiting and staffing and all that stuff. For them, it's decision-making. It's who you pick.

"It would be the easiest player [Browns coach Hue Jackson has] ever coached. I'm sure he's coached some good ones, and so have I. But [Watson is] just simple. Very low maintenance, humble, the same guy every day and always ready. Comes to every meeting prepared.

"He's the greatest preparer that I've been around. He loves it. You know, he graduated in three years. This is a driven, focused kid that's been way too busy being great to be distracted by anything. So he's just ready for the moment. He's so prepared. And it's been that way forever."

Swinney pointed out that Watson was 32-3 as a starter in his college career -- with one of those losses coming when he tore his ACL against Georgia Tech as a freshman and another coming in last year's national championship thriller, which the Tigers lost to Alabama, 45-40.

Watson threw for 4,593 yards, 41 touchdowns and 17 interceptions in 15 games this past season.

Watson had originally considered the idea of participating in the Senior Bowl, where he would have been coached by the Browns' staff. But Swinney didn't fault Watson for declining to participate.

"I think he's done plenty. If they can't evaluate [his career accomplishments], a week at the Senior Bowl isn't gonna change anything," Swinney said. "He'll be ready. He'll have all the workouts and combines and pro days and all that stuff. Just turn on the tape, and get to know him.

"When people really get to know who he is, not just watching him on film, he's one in a million."