Daniel Jones on Danny Dimes: 'There could be worse nicknames' 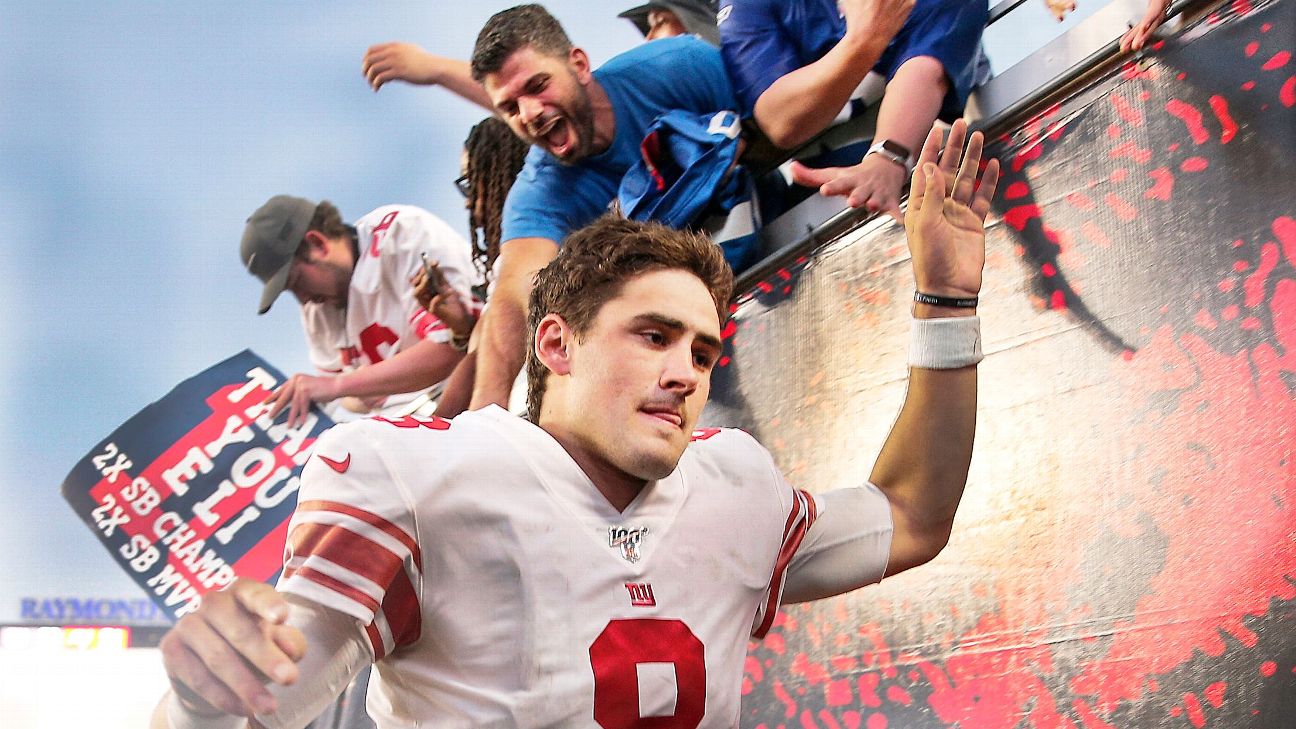 EAST RUTHERFORD, N.J. - #DannyDimes. It trended on social media Sunday into Monday. It has been embraced by a large portion of the New York Giants fan base and has even found its way into the locker room and around the league.
Giants quarterback Daniel Jones seems to be somewhat reluctantly accepting his new nickname.

He has gone from "Swag" in high school to "The Future" at Duke to "Danny Dimes" with the Giants.
"Yeah, I've heard it a little bit more recently," said Jones, who exploded onto the NFL scene Sunday with a first start that included four touchdowns, one of which was the game winner with less than two minutes remaining in a win against the Tampa Bay Buccaneers. "I don't know. It's all right, I guess. There could be worse nicknames."

The rookie primarily goes by DJ inside the New York locker room. His teammates think Danny Dimes is a little too clunky to use on a regular basis.

"Two words. Kind of hard. But it has a good ring to it," quarterback Alex Tanney said. "It sounds like a good T-shirt or something."

It is a T-shirt. It's also a hoodie. You can even find it as a blanket or towel if you search the internet long and hard.

Danny Dimes has become a catchy moniker that seems to epitomize what Jones has done on the football field since he joined the Giants as the No. 6 pick in the draft back in April. It has since become a common refrain surrounding the team.
"I've used it a couple times myself," rookie wide receiver Darius Slayton said. "It's an accurate description of him."

The way Slayton views it, Jones is DJ in the locker room and on the field. That provides a little more swagger than simply Daniel. He's Daniel when he talks to the media or his family. That's the formal version.

Danny Dimes appears only when Jones perfectly places a few passes into the arms of his receivers.

The public seems to have spoken. Two men filed for a trademark of Danny Dimes on the day the Giants named Jones the starter ahead of Eli Manning.

A Pennsylvania man, John Messina, who might in fact be the originator of the nickname, said he did, as well. They're all expected to be denied. Messina said he would give it to Jones anyway, if the trademark were to go through.

Messina tweeted Danny Dimes as a potential nickname the day after the Giants surprisingly picked Jones. That is the first known mention of Danny Dimes as it pertains to Jones and the Giants.

"I stuck with it. It seemed to roll off the tongue. It's a good one," Messina said. "It's funny that it stuck. It's pretty cool [to be the originator]. It's definitely giving me some pride. It's pretty inconsequential, but I'm glad Daniel likes it. It's good fun for everybody."
The Giants tweeted that Jones was throwing dimes almost two weeks later, after rookie minicamp. That's when the nickname started to pick up steam.

By the time Jones shined in the preseason -- turning many of his doubters and biggest critics into fans -- the nickname had started to become mainstream. The Giants used the phrase Danny Dimes seemingly for the first time on a perfect touchdown pass Jones threw to T.J. Jones in Week 2 of the preseason against the Chicago Bears.

At that point, it was over. Danny Dimes it is, and most seem to approve.

"I like it. The fans like it," wide receiver Sterling Shepard said. "It's like the same way they came up with 'Quads' [for Saquon Barkley]. People liked it. People stuck with it.

"[Danny Dimes] stuck with him, and he still throws dimes."

Tight end Evan Engram thinks it's perfect. He has even heard from other players around the league who are on board.

San Francisco 49ers tight end George Kittle sent Engram a direct message the other day with a picture of a hoodie that featured an image of Jones getting ready to make a throw with a dime in his hand instead of a football.
"You've got to rock Danny Dimes," Kittle wrote.

Engram laughed at it all. He's on board with the hoodie and the nickname -- and especially with the results in their first game together.

Engram had six catches for 113 yards, including a 75-yard touchdown, in Sunday's victory with Jones as the QB1.

"Yeah, it's fitting. It's nice," Engram said. "It rolls right off the tongue." 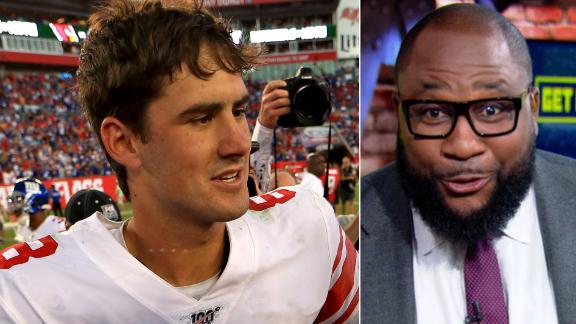