David Fizdale: LeBron James values perfection too much to be a coach 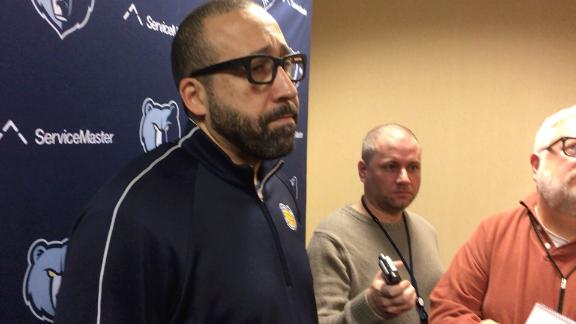 CLEVELAND -- First-year Memphis Grizzlies head coach David Fizdale admits thatLeBron James was instrumental in his ascension to his position after he served as an assistant coach for the Heat when the Cavaliers superstar played in Miami.

"I wouldn't be the coach that I am if I didn't get a chance to coach him and be around him and spend time with him," Fizdale said before the Grizzlies played the Cavs on Tuesday. "So a lot of my success I owe to him and that team and that group of guys that we had down there in Miami."

Although Fizdale considers James "a one-percentile guy when it comes to basketball intelligence," he doesn't anticipate the three-time champion following his career path and one day manning an NBA sideline with whiteboard in hand.

"No," Fizdale said when asked about a potential future in coaching for James. "He would kill somebody. Perfection is like [his standard]. He wants perfection. I could see him actually owning his own team and doing something like that, but I think [as a coach], he would end up killing a player at some point because they wouldn't live up to the expectations that he would set forth."

Indeed, James has expressed interest in owning an NBA team, not coaching one, calling it a "dream" of his this summer. Furthermore, Forbes estimated James' net worth to be north of $275 million, which will only grow with his lifetime Nike deal and current $100 million contract with the Cavs, and named him the 39th richest entrepreneur under 40 years oldon Tuesday. As such, grinding through an 82-game schedule as a coach is probably out of the question for James, regardless of his demeanor.

"Yeah, he's a little right," James said as he smacked his lips and made a knowing face when informed of Fizdale's comments following Cleveland's 103-86 win. "I don't have, my patience is not -- you've got to be very patient as a coach. I don't think I have that much patience. Not that much."

Even so, Fizdale believes that "as a mentor or a guy that is just going to groom players, I don't know if you'll ever find anyone better than [James] and [Dwyane Wade] and Chris Bosh and those guys I was with down there [in Miami]. They were incredible leaders and basketball geniuses, so I was very lucky to be a part of that."

James, who reached four NBA Finals and won two championships in the four years he spent with Fizdale in Miami, gave a strong endorsement of his former Heat mentor.

"He has every quality that would fit a head coach," James said after the Cavs' morning shootaround. "He's confident in his ability. A great learner. Great communicator. He can communicate to some of the players, both on the floor and off the floor. So it was great to see him get the nod, and he's proven so far why he's capable of the job."

Despite the colorful way he described James' lack of patience, something James himself has been self-deprecating about over the years, Fizdale said James "coached me more than I coached him."

"I don't think I've ever been around a guy like that who sees a game that clearly,"Fizdale said.

Fizdale was also complimentary of Cavs coach Tyronn Lue, whom he teamed up with when Lue was a player and he was an assistant coach for the Atlanta Hawks.

"[The Cavs] got the right man for the job, no doubt about it," Fizdale said, detailing how he watched film of Lue and Jason Kidd to try to emulate their coaching poise during games. "T-Lue is as bright as they come. He's incredible at making adjustments, holding guys accountable, relating. They do -- they have the right guy for this job to coach this team, and LeBron has 100 percent respect for him and confidence in him. So it's obvious through the success that they had in winning that title last year."