Deadline past, Pistons and Knicks set for rematch 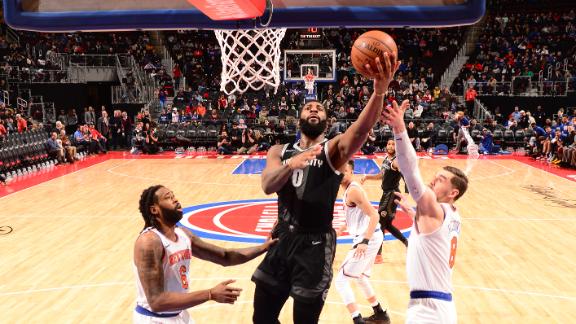 With thoughts of free-agent stars potentially finding their way to "The City That Never Sleeps," the current New York Knicks' cast will attempt to wake up from a persistent nightmare on Friday when it visits the Detroit Pistons.

Blake Griffin scored 29 points, and Andre Drummond added 17 to go along with 16 rebounds as Detroit defeated New York for the fifth straight time and kept its hapless foe winless since its 119-112 victory over the Los Angeles Lakers on Jan 4.

The new-look Knicks inserted guards Dennis Smith Jr. and Wesley Matthews as well as center DeAndre Jordan into the starting lineup in just their second game with the team since being acquired from Dallas in the Kristaps Porzingis trade last week.

The results were a bit of a mixed bag, with Smith representing the positive following a game-high 25 points on 11-for-25 shooting from the field.

Matthews wasn't as fortunate as Smith, as his 2-for-11 effort from the field resulted in just nine points, while Jordan had eight points and eight rebounds.

"I want to see how it all looks together. These guys could wind up being a part of our future," Knicks coach David Fizdale said of the new-look lineup. "I'm trying to give them the early minutes now so that they can catch up and learn our stuff pretty fast."

Things changed quickly, however, as Matthews is reportedly being bought out and will sign with the Indiana Pacers. The team is expected to keep Jordan rather than buying him out, but center Enes Kanter -- who was removed from the rotation in recent weeks -- was reportedly bought out Thursday, making him a free agent.

While many fans are casting an eye toward the summer, when the Knicks officially can chase stars in free agency, the team's current roster will need to contend with keeping Griffin under wraps on Friday.

Griffin, who was acquired in a blockbuster deal prior to last year's trade deadline, scored 30 points in the Pistons' 115-108 home win over the Knicks on Nov. 27. Reggie Jackson had 21 points in that contest and added 19 in Tuesday's tilt as Detroit recorded its third win in its last four games.

"It's important to come out and not take any team lightly and come out and just execute, let our execution take care of the game for us," said Griffin, who is headed to his sixth All-Star Game and first since 2014-15.

Like the Knicks, the Pistons are looking toward the future, as evidenced by their acquisition of rookie shooting guard Svi Mykhailiuk and a 2021 second-round pick from the Lakers in exchange for swingman Reggie Bullock on Wednesday. The move allowed the Pistons to replenish assets after surrendering second-round picks from 2020-23.

The 6-foot-8 Mykhaliuk has played sparingly with the Lakers, averaging 3.3 points in 20.8 minutes per game. He has recorded a few double-digit performances, including a career-best 12 points on 4-of-10 shooting -- including 3-of-6 from 3-point range -- against Charlotte on Dec. 15.

The 7-foot-1 Maker, who was the 10th overall pick in the 2016 NBA Draft, is averaging 4.7 points and 2.7 rebounds in 11.7 minutes per game across 35 games this season. His career-best performance came in 2017, with he scored 23 points against the Pistons, coincidentally.