Dellin Betances: 'Unfair' of Randy Levine to call me victim of agent 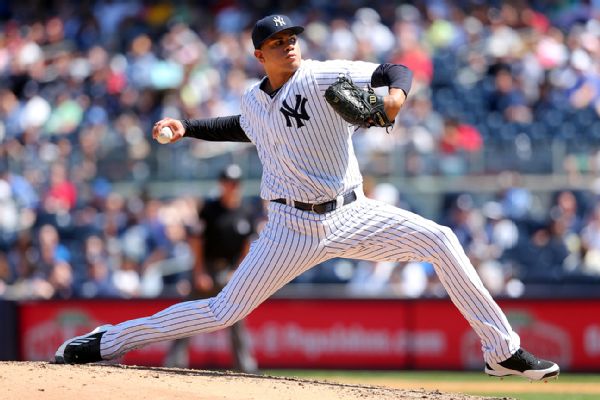 TAMPA, Fla. -- TheYankees and setup manDellin Betancesengaged in a verbal feud Saturday as a result of their arbitration hearing; the winning side, New York, led by team president Randy Levine, severely criticized Betances' agent for what Levine thought was an exorbitant salary request.

On Saturday morning, an arbitrator decided in the Yankees' favor, awarding Betances $3 million for 2017 instead of the $5 million he sought. Betances, 28, has been an All-Star in each of his first three seasons.

Betances said even though he felt "trashed" by the Yankees during the 90-minute arbitration hearing Friday, he had planned to move on Saturday. However, in the aftermath of Levine calling Betances a "victim" of his agent's attempt to change the marketplace, Betances said he reconsidered his position.

"I was planning on putting everything behind me until I was aware of Randy Levine's comments saying I was the victim in this whole process and saying how much they love me, but then they take me in a room, trash me for about an hour-and-a-half," Betances said. "I thought that was unfair."

"There was a lot said," Clark said Sunday during his annual visit to the spring training Cactus League. "That was the most troubling thing. The arbitration has been around a long time. The folks that have been involved in the process, particularly with this particular case, have been around a long time. As you read and heard yesterday, that conversation, and the particulars in some level related to that case being made public in the fashion that they were, is unprecedented and is unprofessional and should not have happened in the fashion that it did."

Betances also said he will have to think about whether he will constantly be available to pitch multiple innings and in the middle of innings.

"It is fair for me to say that," said Betances, who has led relievers in innings pitched and strikeouts over his first three years in the big leagues.

Betances said he would fight for his teammates and the club's fans once the season begins, making it seem more likely that when the juices flow he will continue to answer the call. Betances also said he planned to move forward, even after hearing the criticism of his game during Friday's arbitration, but Levine's comments changed his mind.

In a nearly 20-minute conference call, Levine praised Betances as a "great person" and "elite setup man" while criticizing Betances' agent, Jim Murray, for trying to value Betances as a closer instead of being satisfied with being the highest-paid setup man after an initial arbitration. Levine also took issue with the coverage of the topic in the New York Times.

Arbitration is known to cause harsh feelings, and the Yankees have a history of settling with players. Levine is proud of that. Their last arbitration case was nearly a decade ago with Chien-Ming Wang in 2008.

In this case, Levine blamed Murray for the lack of substantial talks, though Murray disagreed with that characterization.

"What his agents did was make him a victim of an attempt to change a marketplace in baseball that has been well-established for 30 or 40 years," Levine said. "And I feel bad for Dellin that he was used in that way by his agent, because anyone who knows about this process [realizes] that the history is very much established -- that $5 million goes to elite closers."

Murray, Levine said, acted as if he could just decide that Betances should be paid as a closer even though he doesn't pitch the ninth inning.

"It is like me saying, 'I'm not the president of the Yankees, I'm an astronaut,'" Levine said. "I'm not an astronaut, and Dellin Betances is not a closer, at least based on statistics, not whether he could be or couldn't."

On Saturday afternoon, Murray said that Betances would have made tame comments if not for Levine's statements, and Murray pointed out he has a strong relationship with Yankees GM Brian Cashman and the rest of the front office.

Murray also said he thought $5 million was a fair number and that, as with all arbitration cases, it came down to philosophical disagreements. Murray said he did not know why Levine chose to go public with his thoughts.

"It is bizarre to me," Murray told ESPN. "I have no idea why he would have a press conference today, win or lose. You'd have to ask him."

Yankees manager Joe Girardi said Betances has never declined to go into a game in his first three seasons with the team. Girardi said he thought the whole situation would blow over by the start of the regular season, because when players enter competition their mindset changes. Betances seemed as if he could ultimately agree with his manager.

Levine said it was Murray's fault for putting his client in the position in the first place.

"If Dellin is upset about going to a hearing, now we know the result, he should go talk to his representatives and say, 'Why did you bring me in here? What was the point? I should have made a deal. It was obvious,'" Levine said.

While Betances clearly did not agree with that assessment, he said that when he went into the arbitration hearing, he told Levine and Yankees executives, "We don't have to be in this room."

The two sides went through with the hearing.