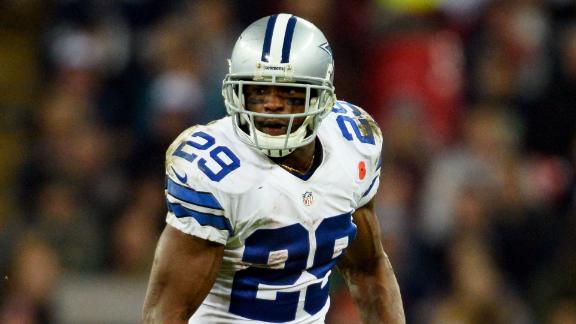 Coach Jason Garrett said before the session that he did not expect Murray to do a lot during practice. During on-air team drills, Joseph Randle took the first-team snaps at running back.

The Cowboys have not ruled Murray out for Sunday's game against the Indianapolis Colts, but Garrett said they would have to see him work in practice to make sure he can carry the ball under duress. Murray was fitted with a hard plastic shell sewn into the top of the glove on his left hand and was wearing it during the portion of practice that was open to the media. He took several handoffs from backup quarterback Brandon Weeden.

On the official injury report, Murray was listed as did not participate because he did not take any snaps in team drills.

"I think we need to see something where there's a comfort level we all have and certainly a comfort level that he has," Garrett said. "Carrying the football is an important responsibility. You have to be able to do it. I think we all want to see it. I know he wants to see it, so we'll take it day by day and see how it progresses."

The Cowboys have tinkered with different ways to protect Murray's hand in case he does play. Emmitt Smith and Terrell Owens had similar surgeries while with the Cowboys and needed a week to recover before playing. Owens did not miss a game in 2006 because the Cowboys had a bye week.

"You start with a plan and a vision for what you need to have there, and then you just go through feedback, with DeMarco and the training staff, you try to get it to the point where it's functional and comfortable for him to go play," Garrett said of the added protection. "It's an evolution. They'll talk back and forth as the week goes on, hopefully get something he's comfortable with."

The Cowboys were without three offensive starters at practice with quarterback Tony Romo following his customary Wednesday schedule. Right tackle Doug Free and right guard Zack Martin did not practice because of ankle injuries.