Deron Williams isn't the player we thought he was 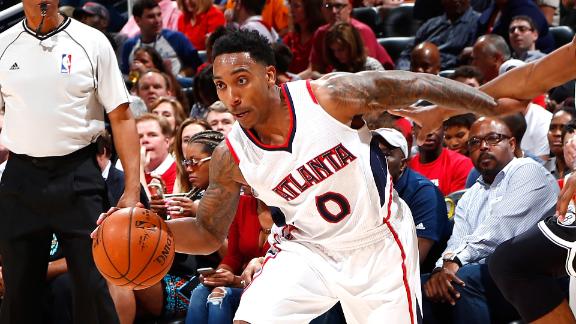 For a while after he joined the Nets in 2012, point guard Deron Williams suggested the offensive system that Brooklyn ran was the reason he wasn't as consistently terrific here as he was for Jerry Sloan in Utah. Later, he cited the many coaching changes he's endured with the Nets. Then it was his sore ankles, which both required surgery this past offseason. But now, after the way he's played in the Nets' first two playoff games against Atlanta?

Williams is out of excuses.

He doesn't get to just stand by his locker anymore, as he did Wednesday in Atlanta, and again try to justify why he hasn't been more of a force as the Nets dropped into a 2-0 hole in their first-round playoff series against the Hawks.

Despite just eking into the playoffs, the eighth-seeded Nets had chances to win both games in the waning moments. If Williams had stepped up even once, they could be coming home now for Game 3 with no worse than a split, with the Hawks trying to fight back a little flop sweat.

The Nets could have had the Hawks fielding questions about whether the unaccustomed pressure of being expected to make the conference finals was getting to them. But instead, Williams' tepid play has left him facing all-too-familiar questions: Why didn't he show more competitive fire Wednesday and assert himself given the urgency of the Nets' situation? And why doesn't Williams seem bothered that Paul Pierce's scathing scouting report on him seems to be coming true?

"Before I got there, I looked at Deron as an MVP candidate,'' Pierce told ESPN.com in an interview last week. "But I felt once we got there, that's not what he wanted to be. He just didn't want that. I think a lot of the pressure got to him sometimes. This was his first time in the national spotlight. The media in Utah is not the same as the media in New York, so that can wear on some people. I think it really affected him.

Reggie Miller, among others, later piled on and agreed with Pierce about Williams.

To which Williams responded: "I'm not bothered by it. I got pretty thick skin. ... That's fine."

It's perfectly understandable if Williams is adamant about not letting Pierce's criticism distort his game so crazily that he takes 35 shots or puts himself before the team. It's fine if he privately doesn't want critics like Pierce to get credit if he does suddenly play great.

But there was an even bigger reason for Williams to be more active in Brooklyn's first two playoff games against Atlanta than Pierce unloading on him: The Nets desperately need him to do more of everything expected of a top point guard if they are going to have a chance in this series.

Yet this is what they got from Williams instead in Game 2 on Wednesday: just seven field goal attempts and two points. One lousy bucket.

It was a similar story in the closing moments of Game 1, when he shied away from contact after he'd gotten his Atlanta defender to leap into the air and needed only to lean into him to get three free throws that could've cut the Hawks' lead to just two.

Williams spared himself that Game 1 collision, all right. But he missed an out-of-rhythm jumper instead. The Nets wasted a dogged comeback. They didn't win the game. Afterward, the Nets' radio announcers weren't the only ones who kept lamenting over and over how Williams coulda, shoulda made the no-brainer choice to draw the foul.

This would be infinitely less irritating if Williams was consistently this bad. But there have been moments when he's shone for the Nets just as brightly as he did for the Jazz. That's what really drives you crazy about him. When a player has demonstrated the All-Star skill Williams has shown in the past, and has the license to take over the game, and has been given the responsibility (not just salary) to be a franchise cornerstone, and has the ball in his hands most of the time, yet he still doesn't assert himself, the only conclusion you can make is the same one that Pierce made: What's lacking with Williams is desire and confidence. Not talent.

No wonder the Nets tried trading him this season, and will try again in the offseason to find someone to take the remaining two years and $43.3 million left on the five-year, $98 million contract they gave him in 2012.

They've tried everything else. And Williams still flatlines like no other athlete in this city.

Williams has now had five coaches in his career, four with the Nets, and the last two were pretty much hired to light a fire under him -- his onetime golf buddy Jason Kidd, and now Lionel Hollins, a taskmaster with an even sharper tongue than Sloan.

Williams has also had to address charges that he's a coach killer. He heard his name kicked around fairly regularly in trade talks this year. Hollins even benched him for a bit this season and started Jarrett Jack instead.

Yet none of that goosed Williams any more than Pierce's remarks.

If anything, Williams sometimes acts as if he'd like to get out of New York just as much as the Nets might want to move him.

And really, it's too bad.

Williams deserves the criticism he gets because it's been a long time since he's thrown off the feeling that he's all-in here in Brooklyn, or that for at least those four quarters he's on the court, winning the game is the most important thing in the world to him.

Williams, who's only 30, can try to explain himself any way he wants. But people around here still remember when he and Chris Paul were considered the top two point guards in the league. Or they'll recall that 2012 night when Williams went into Madison Square Garden at the height of Linsanity and dropped 38 vengeful points on Jeremy Lin in a show of pride and ego meant to suggest there was only one truly great point guard in town. And it was him, not Lin.

Williams strutted around and made eight 3-pointers. The Nets won by eight points.

That Williams hasn't surfaced in a long, long time.

Now the Nets get a lone bucket from him in the playoffs against Atlanta. There really are no excuses left for him.