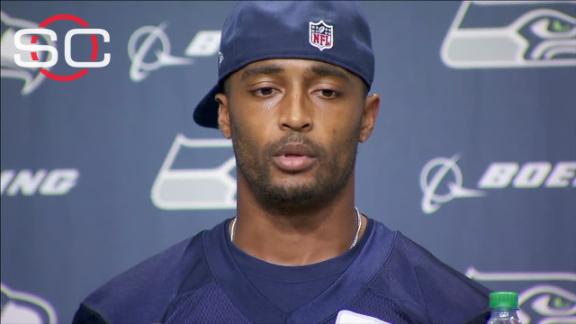 "This is not an isolated incident," said Baldwin, who is African-American and the son of a police officer. "This is not an isolated conversation. This is not isolated just to some specific parts of our country. We see that now. And the advancement of technology has proven that, from the video of Rodney King in 1991 to the numerous incidents that we now have visual evidence of today.

"So as an American, a black male in this country, I'm suggesting, calling -- I'm demanding that all 50 state attorney generals call for a review of their policies and training policies for police and law enforcement to eliminate militaristic cultures while putting a higher emphasis on de-escalation tactics and crisis management measures."

Baldwin said he has spoken extensively with San Francisco 49ers quarterback Colin Kaepernick about these issues in the past month.

"You watch that video of that man who has his hands raised up, and he's walking back to his car," Baldwin said. "Now I don't know all the context, but I know that man has a family, and I can't help but put myself in that situation. The man had his hands up.

"My father's a police officer, and he's told me numerous times about his training and how they've gone through what they call verbal judo, which is essentially them trying to de-escalate the situation. From what I understand, and from what he's told me and his experience in homeland security, is that that method of training is not consistent throughout the entirety of the United States. And that's an issue.

"When you see numerous instances like this happen, and again, you don't know all the context, but you're asking questions. And we also know that the laws that are in place and policies that are in place that protect the law enforcement from any persecution, we understand that there's an inherent risk that comes with being a police officer. But that should not be the case of being a citizen in the United States. There should not be an inherent risk when you have an encounter with law enforcement. There should not be a concern or worry that the law enforcement is not there to protect you. And I think that we're raising a culture or society right now that is questioning that very sentiment. And so as a human being, I can't help but sit up here and tell you how I feel and let you know that it's not OK."

Baldwin said the team has formed a "Building Bridges Task Force" to meet with local law enforcement officials and politicians. He said some of the meetings have already taken place and called them "enlightening and eye-opening."

Baldwin and the Seahawks have locked arms during the national anthem as a demonstration of unity, but he said the team supports Kaepernick's message.

"The conversation has gotten to the point where, yes, the situation that's upon us right now, what's going on in our country, it's devastating, but now it has to reach a point of intolerable," Baldwin said. "We cannot tolerate this. Lives are being lost, and there are questions that need to be answered, and people deserve an answer, and I think that's where we're at right now."