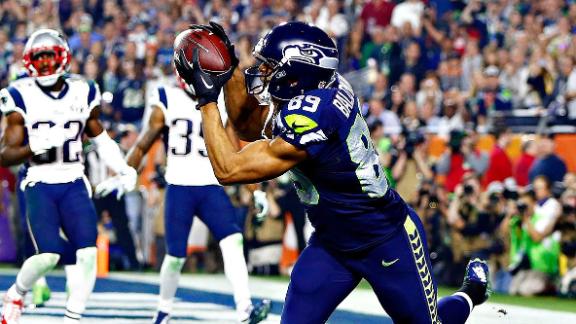 Baldwin hauled in a 3-yard touchdown pass from quarterback Russell Wilson with 4:54 left in the third quarter of Super Bowl XLIX for a 24-14 lead. After the touchdown, Baldwin dropped the ball, squatted and appeared to simulate sitting over a toilet. The celebration drew a 15-yard unsportsmanlike conduct penalty from the officials and an $11,025 fine from the NFL.

"I do regret the fact that it cost my team 15 yards, and to the fans, ultimately I apologize to anybody I offended in any way," Baldwin said Monday night on "The Barbershop" on 710 ESPN Seattle. "It wasn't about that. I just think it was a competitive situation. So to all the 12s, all the fans, that's not what it's about. So I apologize to anyone if I offended you."

"In that moment, it was just a reaction," he added later in the show. "So obviously if I could go back, I would take it back."

Baldwin also revealed that Revis was the intended target of the celebration after saying in the immediate aftermath of Seattle's 28-24 loss, "That is between me and the guy it was directed at."

"I spent a lot of time those two weeks prior to getting ready for that game just focused on my individual matchup with him and I put a lot into it, and in that moment, I guess you could say it was just kind of a built-up frustration I was letting out in that sequence, you know, between him and I," Baldwin said Monday night. "Obviously there was competitive stuff going on in that game, and in that moment, I just let out what I felt personally."

Baldwin added that he was frustrated by his lack of opportunities as he looked to measure himself against "one of the best guys in the league."

Baldwin also addressed some of the other controversies surrounding the Seahawks, defending offensive coordinator Darrell Bevell for Seattle's final play call in the Super Bowl.

"We all take blame in what happened in the Super Bowl and in losses, and to put solely the blame on Darrell Bevell is irresponsible," he said.

As for Marshawn Lynch, who is said to beweighing retirement, "At the end of the day ... he's got to do what's best for him," Baldwin said.

Information from ESPN.com's Nick Wagoner was used in this report.

Seattle's Baldwin Apologizes For TD Celebration
Seahawks wide receiver Doug Baldwin apologizes for his penalty-drawing Super Bowl touchdown celebration and explains what motivated him to do it in the first place.