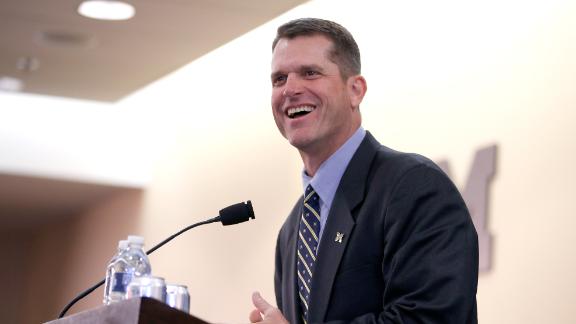 Then Baldwin had one more little comment: "And goBuckeyes."

Baldwin and Harbaugh didn't see eye-to-eye when Baldwin played for him at Stanford. Before the NFC Championship Game last year, Baldwin talked about how he planned to transfer from Stanford toVanderbilt, and had filled out all thepaperwork, before his mother told him he needed to tough it out and stay at Stanford.

"Jim and I did not have the best relationship while I was at Stanford," Baldwin said last January. "I was immature, a young athlete who thought I knew everything. We clashed at times. I was dealing with injuries and that also prevented me from performing the way I wanted to on the field. So a lot of things went into it.

"But I actually thank him now for the adversity he helped me through, so to speak. He made me who I am today, a better person and a better football player. It's nothing against him personally."

Harbaugh: 'Michigan Is About Excellence'
New Michigan football coach Jim Harbaugh addressed the media at his introductory news conference to discuss why he took the job and his expectations for the program.