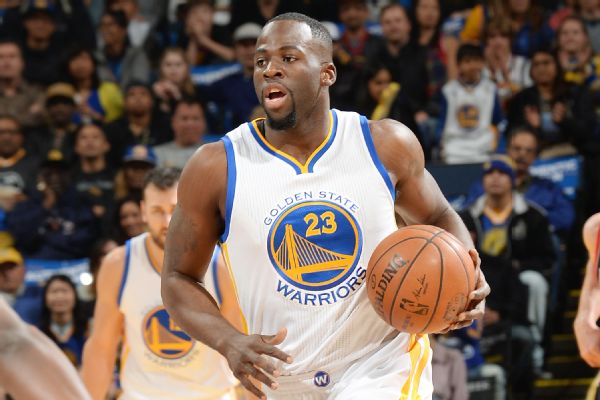 Draymond Green has fired back at Paul Pierceand others for their latest swipes against Kevin Durant's decision to join the Golden State Warriors, saying after practice Thursday that it's time for the critics to "give it a break."

In an extended session with reporters in Denver, the Warriors forward made it clear he believes "everybody got something to say and want to take everything he says and twist it" in coming to Durant's defense.

Green was reacting to Pierce's criticism of Durant's decision to leave the Oklahoma City Thunder for the team that eliminated them in the Western Conference finals last season. The Los Angeles Clippers forward said, among other things, "When you're that close as a competitor, you don't go and join the team that pushed you out."

This built on a groundswell of criticism from current and former players about stars leaving teams to chase a championship elsewhere. The Warriors already were a superteam before one of the league's most unstoppable scorers decided to leave Oklahoma City for the Bay Area.

Pierce appeared to tweak Durant on Wednesday by speaking out negatively about KD joining forces with players he had competed against.

"I'm an old-school guy. I'm a competitor. ... When you want to be the best, you've got to beat the best," Pierce, who is embarking on his 19th season, told SiriusXM NBA Radio. "That's always been something that's driven me. Today's day and age, a lot of these guys are friends. That's like if [Larry] Bird decided to go play with Magic [Johnson] or something. These guys, I think the competition makes the game what it is.

"And Oklahoma, I felt like, was a contending team. They had Golden State on the ropes. I understand when you have great players on losing teams who are tired of losing, struggling in the playoffs every year. You're the lone star. I've been in that position. I could have left Boston years ago, but I stuck it out [and won a championship in 2008]."

Green, who has previously spoken out in reaction to criticism about creating superteams, continued in Durant's defense by making a comparison between NBA athletes and Silicon Valley CEOs.

"Nobody complains when somebody leaves Apple and goes to Google," Green said, adding, "Aren't they in competition with each other?"

"As a basketball player, you are the CEO of a business. You are a business," Green said, according to the San Jose Mercury News. "Kevin Durant is a big business. He is the CEO of that business. So him going to play basketball for a different team, the CEO decided to leave where he was at and go somewhere else.

"Aren't you competitive in your day job if you work for Apple? Don't you want to outdo Google? What's the difference on the basketball court? It's your day job. You want to do what's better for you."