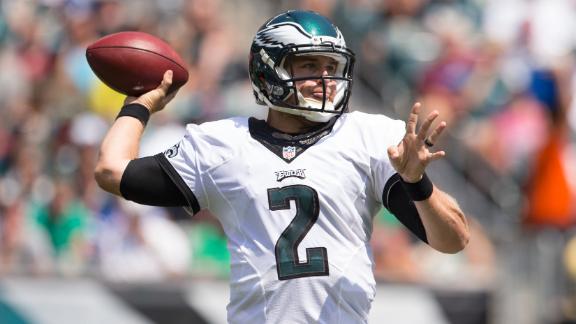 PHILADELPHIA -- The Philadelphia Eagles traded quarterback Matt Barkley to the Arizona Cardinalson Friday, clearing the way for Tim Tebow to potentially be the Eagles' No. 3 quarterback.

Tebow, 28, helped himself with a solid performance in Thursday night's preseason finale against the New York Jets. Playing the second and fourth quarters, Tebow completed 11 of 17 passes for 189 yards and two touchdowns. He also threw one interception.

Barkley, 24, started the game against the Jets, an indication that he was still ahead of Tebow on the Eagles' depth chart. But Barkley completed just 4 of 9 passes for 45 yards in his two quarters of work against the Jets.

If Barkley remains on the Cardinals' roster for at least six weeks, the Eagles will receive a seventh-round draft pick in next year's NFL draft, a source told ESPN's Adam Schefter.

The Eagles don't have to submit their final 53-man roster until Saturday at 4 p.m. Coach Chip Kelly would decide to keep just two quarterbacks, but that seems unlikely because of starter Sam Bradford's injury history. Kelly has also stressed depth at quarterback after using two starters each of the past two seasons.

Mark Sanchez is the team's No. 2 quarterback.

Barkley, a fourth-round draft pick in 2013, was the Eagles' third quarterback the past two seasons. In May, Kelly signed Tebow to a one-year contract to compete with Barkley.

Tebow has been out of the NFL since a 2013 training camp stint with the New England Patriots. While working as a college football analyst for the SEC Network, Tebow also worked with Tom House, a noted expert on throwing mechanics.

Kelly gave Tebow a chance to prove himself. For now, at least, it appears that Tebow succeeded.

"I don't know if it rekindled it [his love of the game] because I always had it," Tebow said Thursday night. "Sometimes when things are taken away, you realize how much you really do love it. Sometimes you love it more after that. The time away made you love it that much more."

Barkley will be the Cardinals' third-string quarterback. Carson Palmer is the starter, and Drew Stanton is his backup. Rookie Phillip Sims tweeted that he had been cut Friday, and Logan Thomas, a fourth round pick in 2014, was also cut, a source told ESPN.