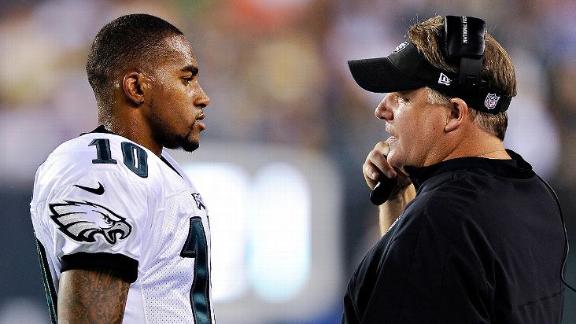 The Eagles' decision to cut ties with one of the most electrifying players in club history comes after the team uncovered information about Jackson's off-field connections and activities, a source told ESPN NFL Insider Adam Schefter. In addition, the source said, the Eagles decided to release Jackson rather than trade him to another team that might be unaware of the info.

"After careful consideration over this offseason, the Philadelphia Eagles have decided to part ways with DeSean Jackson. The team informed him of his release today," the Eagles said in a statement.

A league source told ESPN's Sal Paolantonio that the Eagles decided to release Jackson for a number of reasons due mostly to "work ethic and attitude."

The Eagles, according to the source, learned about Jackson's associations in Los Angeles on Wednesday night, and that report "raised their level of concern," the source said.

Coach Chip Kelly, general manager Howie Roseman and owner Jeffrey Lurie discussed the situation with the club's lawyers over the past 24 hours and decided the best course of action would be to release Jackson. After the NJ.com report, the Eagles stopped talking to other teams about trading Jackson.

Following his release, Jackson, 27, issued a statement that both thanked the Eagles for initially giving him a chance and denounced reports like the one by NJ.com.

"First I would like to thank the Eagles organization, the Eagles fans and the city of Philadelphia for my time in Philly," the statement read. "I would also like to thank [former] coach Andy Reid for bringing me in.

"Secondly, I would like to address the misleading and unfounded reports that my release has anything to do with any affiliation that has been speculated surrounding the company I keep off of the field. I would like to make it very clear that I am not and never have been part of any gang. I am not a gang member, and to speculate and assume that I am involved in such activity off the field is reckless and irresponsible.

"I work very hard on and off the field and I am a good person with good values. I am proud of the accomplishments that I have made both on and off the field. I have worked tirelessly to give back to my community and have a positive impact on those in need. It is unfortunate that I now have to defend myself and my intentions. These reports are irresponsible and just not true. I look forward to working hard for my new team."

The Eagles' decision to release Jackson was supported by center Jason Kelce on Twitter:

We just made an extremely unpopular decision, but I couldn't be more excited and happy with where this organization is going!! #FlyEaglesFly

- Jason Kelce (@Jkelce) March 28, 2014Good luck with whatever team you end up with DeseanJackson10!

He received praise from Reid, who drafted him in the second round in 2008.

"I have nothing but good things to say about the kid," said Reid, now the coach of the Kansas City Chiefs. "I did draft him. I had a great relationship with him. When his father passed away, that was a hard thing for him to go through at a young age. They were best friends. I've experienced life things with him, so I would tell you he was great for me when I was there."

At least six teams already have reached out to Jackson's agent, according to a league source. One that may be interested is the Carolina Panthers, who need a wide receiver after releasing Steve Smith earlier this month.

"We'd be interested. He's an intriguing player, and we'll take a look at him," Panthers coach Ron Rivera told USA Today Sports. "I just got word, and this is surprising to hear. He's an explosive player who has great vertical speed and is strong going to the ball."

However, sources told ESPN.com's David Newton that the Panthers aren't interested in Jackson for a variety of reasons.

Recent reports surfaced that the Eagles were looking to trade Jackson. There also had been rumors that Jackson isn't a fit in the locker-room culture that Kelly, entering his second season, is trying to cultivate.

At the NFL owners meetings Wednesday, Kelly said he liked Jackson but would not commit to him for 2014, saying the Eagles would do "what's best for the football team."

There may have been signs earlier in the offseason that the Eagles were looking to move on from Jackson. The team moved quickly in free agency to complete new deals with wide receivers Jeremy Maclin, coming off a torn ACL, and Riley Cooper.

Jackson's offseason also got off to an unsettling start.

After the Eagles lost in the wild-card round of the playoffs to the Saints, Jackson said he wanted to renegotiate his contract, then a few days later he told police his South Philadelphia home was robbed of more than $250,000 in cash and jewelry, along with a handgun. No arrests were made in the case. Police on Friday clarified the case, saying they mistakenly released incorrect information and Jackson was robbed of $20,000 in cash, according to the Philadelphia Inquirer.

Jackson excelled in Kelly's fast-paced offense, setting career highs in receptions (82) and yards (1,332) and while also amassing nine touchdowns. His 6,177 receiving yards are the second-most in franchise history, and his four punt-return scores are tops in club history.

Jackson also has 21 TD catches for at least 30 yards, tied with Miami's Mike Wallace for the most in the league. No other player on the Eagles' roster has more than eight (Maclin).

Information from ESPN Stats & Information is included in this report.