Eli Manning's time as the starting quarterback of the New York Giants has ended. It spanned parts of 16 seasons -- a franchise record -- and included two Super Bowl victories. Not a bad run.
His Super Bowl MVPs and postseason performances are the stuff of legend. So are his pranks and his "aw-shucks" personality.

It has been quite a ride -- 234 starts spanning parts of three U.S. presidencies. Along the way, Manning has been one of a kind in the way he has handled such situations as forcing his way out of San Diego, being criticized by his teammates and landing on the front page of the New York Post in a dunce cap.

The memories are indelible. These are a sample of the go-to stories he has left with some of the people he has worked with over the years.

Zak DeOssie (Giants long-snapper, 2007-present): "I snapped the ball over the punter's head in Philly. Remember that a few years ago? [Punter] Steve Weatherford tried to corral it. He didn't get it. They scored a touchdown.

"Eli looks at me and laughs, just the two of us, and goes, 'When it rains it pours, buddy. See you on the bus!'"

Ernie Accorsi (Giants general manager, 2004-07): "This just describes [Eli] and the difference between him and Peyton [Manning].

"When you work out a player prior to the draft, you're allowed to work him out in one of two places -- his hometown or his college campus. So Eli's pro day was going to be at the New Orleans practice facility. There were some players, some Tulane receivers, some players from LSU who happened to live there. It was indoors. I was there.

"Tom Condon is the agent, and we're sitting there. J.P. Losman shows up. He was a quarterback who was also picked in the first round. He shows up unannounced. It would have been fine, but he didn't tell anyone. He just shows up. He's out there throwing the ball around. So I walked up, and Peyton was there. Archie was there, but he was so nervous driving around in circles in the parking lot.

"He just went about his business and had a brilliant workout. That's Eli. ... I liked that calmness."

Antrel Rolle (Giants safety, 2010-14): "Eli is not a guy of many words. Before we left and went out to Indianapolis to prepare [for Super Bowl XLVI], he stood in front of the whole team. And I can't tell you that I ever really saw that in the two years prior to myself being there. That he stood in front of the whole team! He got everyone's attention -- and obviously he's Eli, and everyone is going to listen to what he's going to say -- and his approach was very simple and very direct. It was very, very powerful.

"He assured everyone that we were going to Indianapolis to take care of business. That this wasn't a fun trip, a trip to let our hair down, enjoy the festivities. This was a trip to go out there and take care of business. And for a person like myself who had gone to a Super Bowl and lost in the final minutes, I understood it and, more important, I gravitated toward it because it hit home to me. That's not Eli's specialty right there. I'm not sure what he does in the offensive room, but as far as the whole team, that was never really his thing.

"For me, my eyes brightened up wide open, and I really took into account what he was saying. I went out there and studied, studied, studied. Our practices were the best I've ever seen in my entire career that week. And just going out there and putting everything on the line to the point that after the Super Bowl all I did was go to my room and relax because I had nothing left in my tank. He 200 percent helped everyone get straight."

Prince Amukamara (Giants cornerback, 2011-15): "My rookie year, I had never heard Eli talk, give a speech. And then we went to the Super Bowl. It was probably a day before we traveled, and Eli stood up before everybody and gave a leadership speech, like, 'Hey, this is still a business trip! Of course we want to enjoy ourselves, but curfew is set at this time.'

"I was like, 'Eli, you haven't spoke all year. You're talking about curfew!'

"It was great to see that in him and see him do that. I thought that was special. I didn't really look at everybody else [how they reacted]. I'm sure it was talked about by our leadership council.

"But I was just like, 'Whoa, Eli.' He never really said anything, and all of a sudden he's laying down the law with curfew."

"[Former quarterbacks coach Chris Palmer] used to ride a bike over to Albany from the dorms. So he got him one day. [Eli] took his bike off the bike rack, tied it to a rope, hung it from the rafters in the middle of the gym. Tied it up so Chris couldn't ride the bike!

"Lawrence Tynes would take the air out of all the tires [in cars]. Not to where they are done or popped or ruin the car. And [Eli] tapes a bike pump, a hand pump to the car so they can pump up their tires. And [Eli's] driving by so they can videotape him.

"Shaun O'Hara had a Hummer at that point. And [Eli] would take his EZPass off when we'd leave camp. So when [O'Hara] would get back to [New Jersey], he would get tickets at every point. And then [Eli] would give it to him at his locker when he gets back and laugh. So, it's good stuff."

Amukamara:"So I went back to my locker, and I saw my phone is in Chinese or whatever. I'm freaking out, like, 'How do I get this out?' I can't Google it because everything is in Chinese. I look to the right a couple lockers down, and you see a dude smirking, and it's Eli.

"I guess that is Eli's prank. If you mess with him, he puts your phone in Chinese. I had to Google on someone else's phone."

Michael Thomas (Giants safety, 2018-present): "It's cool to see how personable he is. He'll sit and talk with anybody, especially in the lunch room. It could be very easy to say, 'Oh, he's Eli Manning. He's very busy. He's working. He doesn't have time.' But no. He's cool. He's just one of the guys. That is pretty cool.

"He came and introduced himself [to me]. It doesn't matter [if it's a teammate or ball boy], he's just one of the guys. I like that. I respect it. Notice it the first day. It says he's a great teammate, great personality. He's real. Not somebody who is fake. You can tell real quick who is fake and who is not."

Justin Tuck (Giants defensive end, 2005-13): "Me and Coach [Tom] Coughlin used to have these indirect competitions of who could be in the office first. But Eli was always a guy who was No. 1 or 2 in the building. And one or two of the last to leave the building.

"For a two-time Super Bowl champion, multiple Pro Bowler, if you want to count how many dollars he's made in contracts and marketing, for him to still be that guy that the franchise points to as doing things the right way, I think that is remarkable.

Justin Pugh (Giants guard, 2013-17): "The one thing that always sticks out to me about Eli is his work ethic. He is the benchmark that I compare every pro to. He was the first one in, last one out of the practice facility daily.

"He never blamed anyone else when things got tough, when he easily could have. I'm honored that I got to come into the league and learn from a man like that.

"He had his big-kid moments, like when he had the restaurant bring out a $10,000 check for the annual rookie dinner or when he had the equipment guys put dye in my gloves, which had my hands stained blue for a week.

"All joking aside, it takes a certain kind of person to be successful in New York, and Eli Manning showed everyone the blueprint for success. Whatever is next for Eli, he'll be just fine -- unless it's golf. Then he doesn't stand a chance!" 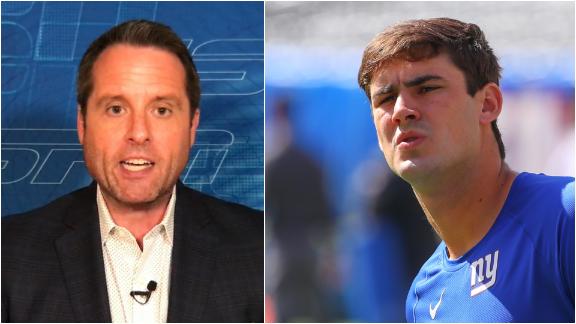 Graziano: Jones starting is not an indictment of Manning
Dan Graziano acknowledges that the Giants are in a rebuilding phase and the team wants to see what it has in Daniel Jones.
Report a correction or typo
Related topics:
sportsespn2019nfleli manningnew york giants
Copyright © 2020 ESPN Internet Ventures. All rights reserved.
More Videos
From CNN Newsource affiliates
TOP STORIES