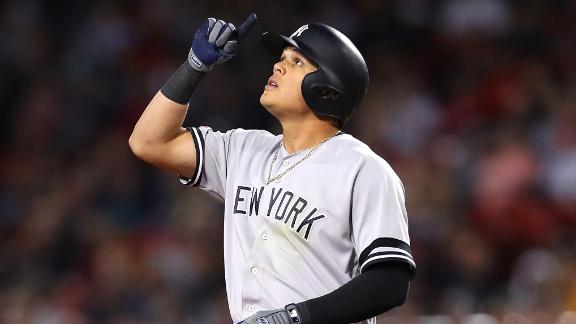 DETROIT -- The New York Yankees wrapped up their visit to Detroit with two victories and a couple new injuries.

The Yankees are closing in on an AL East title, but the injury woes that have dogged them this season don't seem to be going away.

"I just keep saying it's going to make for a good World Series DVD," said CC Sabathia, New York's starting pitcher in the second game. "Nothing we can do."

Sanchez exited in the fourth, an inning after he was thrown out in his first stolen base try this year. He has been on the injured list three times in the past two seasons because of groin problems. Sanchez said through a translator he felt he overstretched his leg sliding into second but felt fine at first. He felt tightening after squatting behind home plate.

Encarnacion homered in the first game, then left in the seventh inning with a strained left oblique muscle. J.A. Happ, New York's starter in the doubleheader opener, is also dealing with some health issues, although manager Aaron Boone didn't sound too concerned about that.

Sanchez, Encarnacion and Happ were all expected to return to New York. The Yankees, meanwhile, finish this road trip with a series at Toronto.

Sabathia, who has dealt with right knee problems, pitched into the fourth inning in his return from the injured list. He allowed only one hit through the first three innings but gave up a two-run double to Brandon Dixon in the fourth. He threw 56 pitches in 3 1/3 innings before being relieved by Domingo German (18-4).

Aaron Judge and Gio Urshela each hit two-run homers for New York in the second game.

Aroldis Chapman came on with one out in the ninth, a runner on third and the score 6-3. He allowed an RBI infield single to John Hicks but was then able to close the game out for his 37th save in 42 chances.

Encarnacion, New York's designated hitter in the opener, had a two-run homer in the third but was pinch hit for by Mike Ford in the seventh because of the oblique problem.

"I guess he felt it in his first at-bat," Boone said. "Obviously, he homered in his second at-bat. My understanding is that he was fine swinging, but it bothered him when he coughed.

"We hope it is minor, but we want to get it checked out."

It's been an injury-plagued season for the Yankees -- slugger Giancarlo Stanton has played only nine games. Encarnacion missed 30 games with a broken right wrist after he was hit by pitch from Boston's Josh Smith on Aug. 3.

Happ pitched shutout ball until the fifth, when Dawel Lugo hit a two-run homer with two outs. Christin Stewart singled and Boone brought in Chad Green (4-4), who allowed one run over 2 1/3 innings. The Yankees said Happ had left biceps tendinitis.

"It has been an issue for the last few starts -- maybe the last three to five," Happ said. "It's something I've been able to pitch through, but hopefully we can find something so I can get in my work in between starts."

The Tigers have now lost 102 games on the year, although they did manage to split the season series with the Yankees 3-3.

"This was better than I've been in a while," Turnbull said. "I didn't have the results I wanted -- obviously four runs in five innings isn't good enough -- but the mental process was a lot better."

Tigers: UT Niko Goodrum (groin) and CF JaCoby Jones (wrist) are both expected to miss the rest of the season.