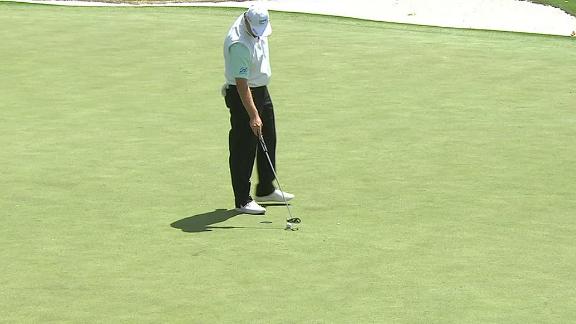 AUGUSTA, Ga. -- Ernie Els made dubious Masters history in the opening round Thursday by scoring a 9 on the par-4 first hole -- the highest in 80 years of the tournament.

Els, 46, a World Golf Hall of Famer who has won four major championships, six-putted the first green at Augusta National after chipping from off the green to within 3 feet for what appeared to be an easy par.

It could have been worse. The Masters live scoring had it listed as a 10 all day, until officials conferred, reviewed videotape and determined that Els had taken just six putts, instead of seven. He finished with an 8-over-par 80 and is tied for 81st.

"It's hard to putt when you've got snakes in your head," Els said.

The South African, who has 19 PGA Tour victories and more than 60 worldwide wins, was understandably dazed afterward. He stopped to talk with reporters but had difficulty explaining how it all went so badly.

"I couldn't putt with a stick," Els said. "You make some stuff up in your brain, you know, it's difficult. It's something that, what holds you back from doing your normal thing? I don't know what it is. I can go to that putting green now and make 20 straight 3-footers. And then you get on the course, and you feel a little different, and you can't do what you normally do. So it's pretty difficult."

Els started innocently enough. He missed the par-4 first green but chipped up to inside 3 feet. That's where the trouble began.

"I couldn't get the putter back," he said. "I was standing there, I've got a 3-footer, I've made thousands of 3-footers, and I just couldn't take it back."

Els missed and then did so again from distances of 3 feet, 10 inches, 11 inches and 2 feet. The last two putts he hit one-handed in disgust.

"And then I just kind of lost count after, I mean, the whole day was a grind," he said. "I tried to fight. I'm hitting the ball half-decent, and I can't make it from 2 feet.

It marked the 23rd 6-putt or worse in stroke-play events on the PGA Tour since 1992, according to ESPN Stats & Information. The last 6-putt on tour was Graham DeLaet at the 2014 Open Championship at Royal Liverpool.

Els, who won The Open in 2012 using a belly putter, has struggled with the "yips" in recent years. Starting Jan. 1, the rules of golf banned the use of an anchored putting stroke. At the Dunhill Links Championship last year and earlier this year at the South African Open, Els missed short putts, videos of which went viral. After a putt at the Dunhill in Scotland, Els described himself as a "little bit jumpy"on the green.

"That was a disaster," he said at the Dunhill. "Anybody who has ever seen the yips, obviously, that was the perfect yip stroke you've ever seen in your life. It is what it is. The game of golf you've got to do some silly things when you play long enough ... Hopefully, I won't have too many of those again because you can't play golf like that."

Els left the course wondering how he even kept going.

"I don't know how I stayed out there," he said. "But you love the game, and you've got to have respect for the tournament and so forth. But it's unexplainable. It's very tough to tell you what goes through your mind. It's the last thing you want to do is do that on a golf course at this level. So it's very difficult."