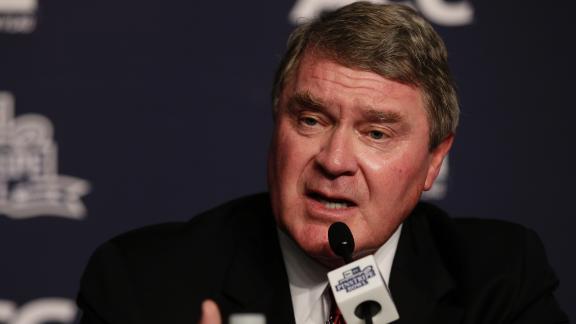 This week, ACC commissioner John Swofford said that in terms of the number of teams, an eight-team playoff "would probably be ideal."

This is the first year of a 12-year contract with ESPN to have the four-team College Football Playoff.

CFP executive director Bill Hancock said his group is committed to only four teams for the next 12 years, and "there has been no discussion of expanding."

This coach went as far to suggest the first- and second-round games could be played at neutral sites, including cold-weather sites, with cities bidding to host the games like the NCAA basketball tournament regional model.

More than half of the coaches (53 percent) from the Power 5 conferences (ACC, Big 12, Big Ten, SEC and Pac-12) who voted chose an eight-team playoff, compared with 33 percent for the four-team model.

One Power 5 conference coach said "four is good," but "eight would be perfect."

Swofford, who is a member of the CFP management committee, said he doesn't think "all the controversy [of the four-team field] is going to go away."

"You have four teams that get a chance to play for the national championship, which is twice as many as before," Swofford said. "But whoever's fifth or sixth is not going to be happy. There will be some [Power 5] conferences that won't have a team in the playoff."

American Athletic Conference commissioner Mike Aresco said an eight-team playoff "increasingly will be a topic of conversation. But each FBS conference would want to take the temperature of its membership on something as significant as this."