Everything you need to know about the 2018 season's new managers 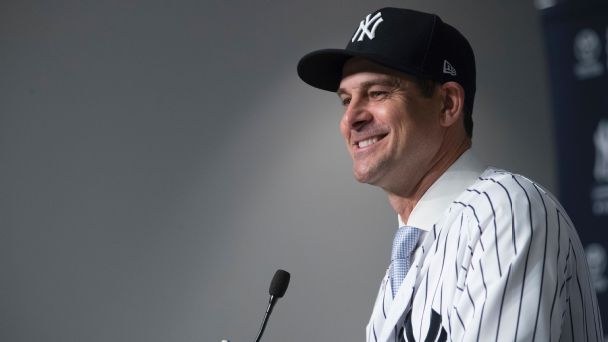 A healthy dose of managerial changes is nothing new.

When spring training officially opens next week in Florida and Arizona, six teams -- 20 percent -- will have a different skipper than the one who finished the 2017 season. That carousel was matched as recently as 2015 and 2013, and was surpassed by one in 2011.

But there is something different about the Class of 2018. They are generally younger and far less experienced than the current occupants of those 30 coveted jobs. They come not only from the dugout, but from the front office and the broadcast booth. What they might lack in on-the-job training is made up with education, enthusiasm and -- at least for now -- media savvy.

At least three skippers are taking over clubs where playing into late October is not only a possibility but an expectation. And one might even be on the hot seat if he does not finish the year on a podium shaking hands with Rob Manfred.

This year's crop bears little resemblance to Pop Fisher, the crusty manager of the floundering New York Knights in "The Natural." Here is a primer on the new field bosses who hope their hitters are blessed with swings reminiscent of Roy Hobbs:

Boone left the ESPN Sunday Night Baseball booth to take over a team that was one win short of a World Series appearance, and that was before the Yankees regained Evil Empire status by trading for Giancarlo Stanton. Boone, who will be 45 on Opening Day, is best known for his game-winning home run in Game 7 of the 2003 ALCS, and Yankees fans will now be looking for another iconic feat.

Boone is trying to join Ralph Houk in 1961 as the only Yankees to win a World Series in their first season as a big league manager. The short list includes Bob Brenly of the 2001 Diamondbacks, Eddie Dyer of the 1946 Cardinals and Bucky Harris of the 1924 Senators.

While he doesn't have managerial experience, Boone grew up in a baseball family and is a skilled communicator, which can go a long way in New York. GM Brian Cashman was comfortable enough to make Boone the first Yankees manager without any previous coaching or managerial experience since Hall of Famer Bill Dickey in 1946. How did that work out? Dickey took over when Joe McCarthy stepped down in late May due to ill health, but he resigned in September with the Yankees out of the pennant race.

Boone played collegiately at Southern California and is one of seven Pac-12 Conference alumni managing in the majors, joining Dave Roberts and Torey Lovullo of UCLA, Bob Melvin and Bryan Price of California, Terry Francona of Arizona and A.J. Hinch of Stanford.

Pressure will also be a constant companion for Cora, who, like Boone, is one of four new skippers with no previous managerial experience (excluding winter leagues, Arizona Fall League etc.). The 42-year-old Cora spent only one season as bench coach of the World Series champion Houston Astros after four years as an ESPN broadcaster.

While the coaching résumé looks scant, he was general manager for Criollos de Caguas in the Puerto Rican Winter League for five seasons, including two campaigns as manager. He is the first former Red Sox player to manage the club since Butch Hobson from 1992 to 1994.

Cora, Boone and Dave Martinez of the Nationals are three rookie skippers taking over teams that made the postseason last October. With ace Chris Sale and a core of young position players returning, Cora will try to take the Red Sox beyond the division series for the first time since they won it all in 2013.

Martinez is the seventh Nationals manager in the 14 seasons since the franchise relocated from Montreal, a stunning number given there have been four division titles and two more second-place finishes. But the Nats are 0-for-4 in division series play in that span, and Bryce Harper will be a free agent next winter, leaving Martinez with little margin for error.

Though he is a rookie manager, Martinez worked for 10 seasons as a bench coach under the well-respected Joe Maddon with the Tampa Bay Rays and Chicago Cubs. This will be the 30th season of professional baseball for the 53-year-old Martinez, who played for nine clubs, including the Expos, over 16 seasons.

Martinez has waited patiently for this opportunity, interviewing for several openings in recent seasons, including the Nats job after the 2013 season that went to Matt Williams.

For the record, Martinez has a .276 career batting average, the best of any of the new hires, raising the average BA for the current crop of skippers to .268. The number dips to .253 if you take out Don Mattingly and Hall of Famer Paul Molitor.

The Mets' front office was so impressed with Callaway's initial interview in October that they called off a second round of talks with other candidates and promptly hired the Cleveland Indians' pitching coach for the past five seasons.

The Mets have had trouble keeping their pitchers healthy and effective the past few seasons. Enter Callaway, whose Cleveland staff last year had a major league best 31.7 WAR, far ahead of the second-place Yankees (24.4). He will look for similar results on a Mets staff that includes Noah Syndergaard and Jacob deGrom.

The 42-year-old Callaway already has floated some less traditional ideas such as using a quick hook on some starters the third time through the order as well as a bullpen without a designated closer.

Callaway had a brief playing career and is one of three former pitchers in the current managerial pool, joining Bud Black of the Colorado Rockies and Bryan Price of the Cincinnati Reds.

For decades, there were select protocols for hiring a manager, where a candidate would often move up the ladder from a minor league skipper to a major league coach and finally to a big league gig. No hire turned that process on its head more than Kapler, who spent the past three seasons as the director of player development for the forward-thinking Los Angeles Dodgers.

Three years ago, ESPN The Magazine ranked the strength and implementation of each team's analytics staffs in the four major sports and ranked the Phillies dead last, at 122nd. General manager Matt Klentak has dramatically altered that course, and another example is the recruitment of Kapler, who has written for Baseball Prospectus and has a personal blog covering topics like nutrition and fitness.

The 42-year-old Kapler's brief managerial résumé includes one season at Class-A Greenville in 2007 and Team Israel in a qualifier for the 2013 World Baseball Classic.

Five current managers are former outfielders with the hiring of Martinez and Kapler, the second most of any position. Catchers still rule the roost with 12.

Kapler and Boone are two of eight California natives in the 2018 managerial pool. No other state has more than two.

The closest we'll get to Pop Fisher in the Class of 2018 is the 60-year-old Gardenhire, who takes over the massive rebuild that is already underway in Detroit.

Perception says managers are skewing younger, but Gardenhire is one of nine 2018 field bosses who is 60 or older, raising the average age to 53. The elder statesman is Maddon, who turned 64 on Thursday. On the opposite end, Kevin Cash of the Rays turned 40 in December, so there are no skippers in their 30s. Gardenhire won six AL Central titles in his first nine seasons as manager of the Minnesota Twins. He also averaged 96 losses in each of his last four years in the Twin Cities before being fired in 2014.