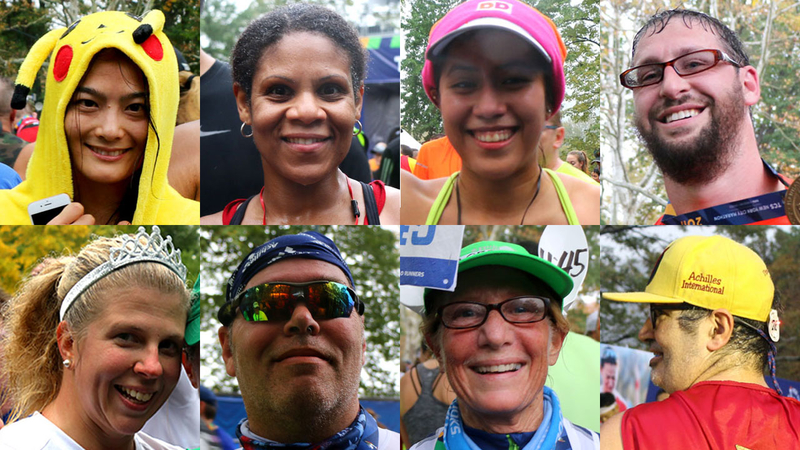 Tomo Hirario
New York City
"I ran as a Pikachu outfit and everyone was cheering for Pikachu so that was very nice."

Robert Sanchas
Rhode Island
"What moved you to run the marathon?" "Foot in mouth syndrome. I made a comment to a friend. She was moving up to New York, and I said before she moved, I'd do a half marathon. I didn't realize she was moving in five weeks, so I had five weeks to go from walking one mile ... to running a half marathon. Then I put my other foot in my mouth and said, 'Well, I ran a half, might as well do a whole.' And the half was in May."

Theodora Blanchfield (left) & Leah Wenger (right)
Franklin Lakes, New Jersey
Leah: "The woman who was training us ... said Theodora should walk starting at mile 12 in Williamsburg ... anyway, we didn't walk until mile 24, and we did the whole thing in."
Theodora: "We were both under trained. We had a hard time training all summer because I was sad after losing my mom, but we did it."

Fritzline Montalmant
Brooklyn
"Just wanted to check it off my bucket list." "First marathon?" "Yeah, first and last. It was hard, the training was hard but doing it was well worth it, finishing was all worth it." "Hardest mile?" "All of them. I think around 20 was hard. But the crowd just keeps you going it's so amazing. My mom and my daughter, they motivate me to reach limits and surpass all my goals so this is for them."

Yecheskiyahu Herz
Brooklyn
"I did 26.2 miles, and I did a burpee at every single mile ... I feel great. The last burpee was the strongest one because I knew I wouldn't have to do another one."

Guadalupe Arellano
New York City
"This is my second time running. I've been wanting to run the marathon since I was 13. You have to qualify by 18, so last year was my first one. I just want to do it every year. At Mile 19, I caught a cramp right on my thigh, so I kept trying to massage it and trying to get through it because I wanted beat my time from last year. Last year I was just worried about finishing it so I did it in 5 hours and 15 minutes. This year I believe I did it in 4 hours and 30 minutes."
Report a correction or typo
Related topics:
sports2017 tcs nyc marathonrunningfind your finish
Copyright © 2021 WABC-TV. All Rights Reserved.
2017 TCS NYC MARATHON
Hospital for Special Surgery helps runner get back on her feet
Bronx goIT team competes with healthy food app
Final finishers: Inspiring stories of runners who wouldn't give up
Shalane Flanagan, Geoffrey Kamworor win TCS New York City Marathon
TOP STORIES
Man dies after being shot outside Bronx church
Mother throws children out window and then jumps
Violence continues at Washington Square Park; curfew now at midnight
Longtime Eyewitness News viewer, 'Toots' passes away just shy of 101st birthday
Hauppauge School District will not make masks mandatory inside school buildings
What mom, daughter did with 80,000 penny child support payment
Polls open in NYC as early voting begins in primary election
Show More
Diver describes near-death experience inside whale's mouth
Legally blind cheerleader, track team member will attend Harvard in fall
Flying taxis could soon become a reality
3 arrested, 1 suspect still at large in drive-by shooting that wounded 4
Runaway peacock captured, police search for owners
More TOP STORIES News