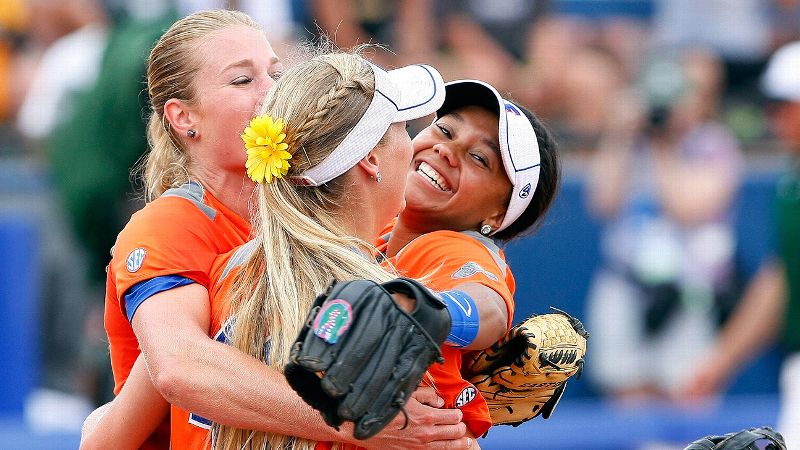 OKLAHOMA CITY -- Florida didn't dominate Baylor in the rematch, but the Gators' performance was good enough.

The Gators, who beat Baylor 11-0 Thursday on the opening day of competition, won Sunday with solid fundamentals. Florida had eight hits and three walks, but no home runs.

"The little things win games here in the College World Series," Florida coach Tim Walton said. "Just proud of our kids for believing in us and believing in themselves and in their abilities and not trying to do too much. Here we are getting a chance and an opportunity to play for a national championship."

Rogers allowed three runs on five hits and threw 96 pitches. She improved to 29-8 this season.

"I just want to continue to do everything and not over think anything, and use my defense like I have all season," she said. "I mean, they've been doing a great job here and all year and I will continue to use them."

Florida (53-12), took a 5-0 lead Sunday in the top of the fifth inning before the Bears scored three runs in the bottom of the fifth to make it a game. The Bears, who came from 7-0 down to beat Kentucky on Saturday night, couldn't quite do it again.

"I'm extremely proud of my team," Baylor coach Glenn Moore said. "We came here to win this thing, and were dealt a big setback on the first day and had to recover from that. I thought we showed incredible fight, pride as we worked our way back to today and won an incredible come back last night, of course. We didn't take the easy road to get here."

Stephanie Tofft walked with the bases loaded in the top of the sixth to score an insurance run. She had two hits and knocked in two runs and Taylor Schwarz knocked in three runs for the Gators.

Kaitlyn Thumann knocked in two runs and Jordan Strickland knocked in the other one for the Bears (49-16).

Walton said that rally against Kentucky might have sapped Baylor's energy.

"I can tell you that being on the other side of that coin, winning an emotional game yesterday, in the fashion that they did, I know how draining it can be," he said.

Alabama 2, Oregon 0Haylie McCleney homered in the bottom of the fifth inning to break a scoreless tie and Alabama beat Oregon 2-0 on Sunday, setting up an all-Southeastern Conference best-of-three championship series in the Women's College World Series.

Alabama led 2-0 heading into the top of the seventh, giving the Ducks one last shot. Oregon's Kailee Cuico's single brought the tying run to the plate with no outs. Janelle Lindvall put one over the left-field fence, but it barely sailed foul, and she struck out looking on the next pitch.

Koral Costa singled with two outs to keep the Ducks alive, but Jaclyn Traina struck out the final batter to preserve her four-hitter.