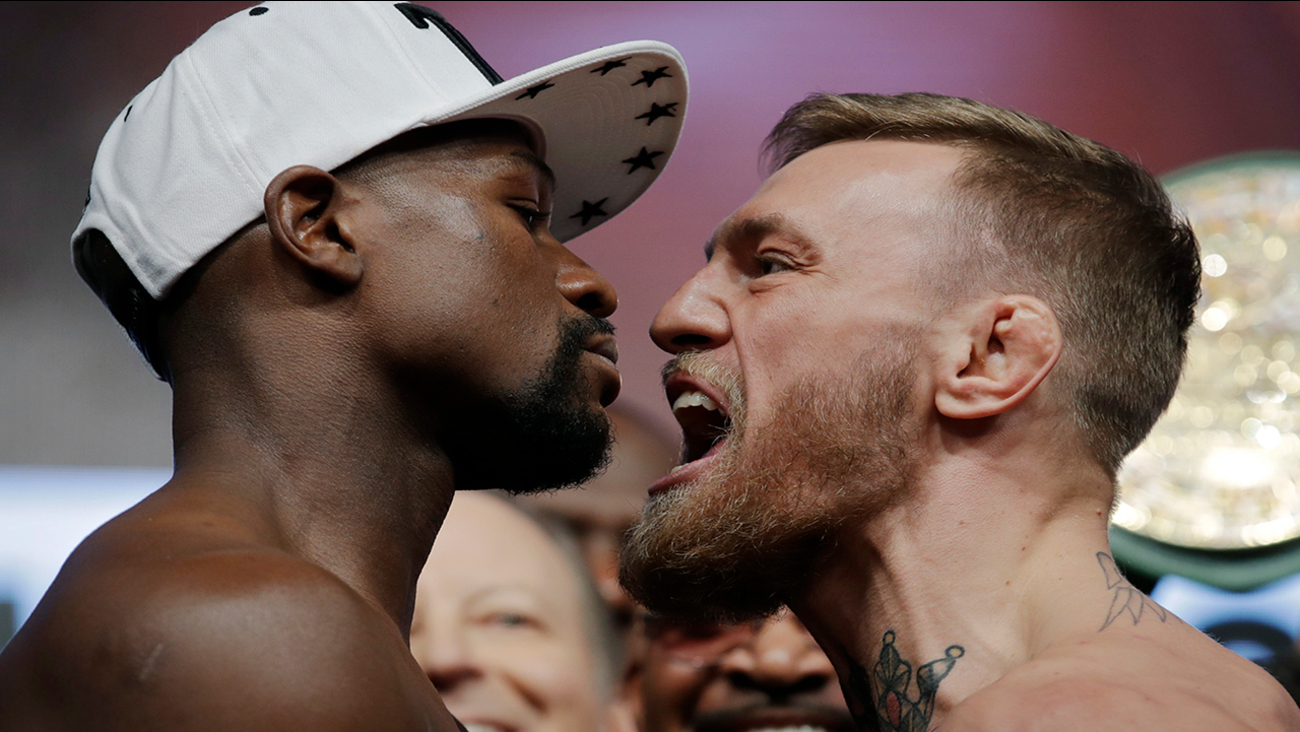 AP
LAS VEGAS -- Conor McGregor has been kept pretty much under wraps ever since his fight with Floyd Mayweather Jr. was announced, emerging occasionally to trash Mayweather only to disappear again behind the closed doors of the UFC training center.

It's not by accident. The biggest selling point of the spectacle that is Saturday night's 154-pound fight is the unknown.

Is McGregor good enough to land a big punch on Mayweather? Did he acquire enough boxing skills in just a few short months to make what should be a lopsided fight competitive?

Inquiring minds want to know, and there are enough of them to make this the most watched fight in history. Some 50 million people in the U.S. alone are expected to gather with friends and family to see it all unfold.

Not so fast, said Mayweather, who comes from a boxing family and famously began throwing punches before he could walk.

"After 21 years I've been hit with everything and I'm still right here," Mayweather said. "If you give it you must be able to take it."

It's a fight that really makes no sense other than millions of people want to watch it. But the economics of the fight wouldn't make any sense, either, if people saw McGregor - the UFC star who has never boxed professionally - in action and decided he just wasn't good enough to be in the ring with a fighter like Mayweather.

No mystique, no 5 million buys on Showtime pay-per-view. That's why there was never any chance of McGregor having a tuneup fight.

And that is why the only boxing anyone outside McGregor's inner circle has seen was him hitting the heavy bag in a comical media day performance and a few seconds of a UFC clip purportedly showing him knocking down Showtime announcer and former fighter Paulie Malignaggi.

No worries, said McGregor, who says his boxing talents shouldn't be underestimated.

McGregor weighed in at 153 pounds Friday to 149 for Mayweather. A crowd that nearly filled the T-Mobile arena - many waving Irish flags - cheered loudly for McGregor while booing Mayweather.

McGregor's fan base is driving this fight, united in their fervent hope that the Irish UFC champion can muscle Mayweather around the ring and deliver knockout punches to his head. Sports books in this gambling city have taken so many longshot wagers on McGregor winning by a knockout early that they will suffer their worst loss ever should it actually happen.

What should be a 100-1 fight began as 11-1 in Mayweather's favor. Now it's 5-1, though a lot of big money - including a few million dollar bets - has been wagered on Mayweather in recent days.

"I don't see him lasting two rounds," McGregor said. "He messed up with the 8-ounce gloves. Keep your hands up, keep them down. I don't care. I'm going to break through whatever is in front of me."

For the flamboyant McGregor the fight is a chance to make money he couldn't dream of in the UFC and gain a fan base outside of mixed martial arts. Estimates vary, but he could take home $100 million for a challenge of Mayweather that seemed improbable when he first started talking about it two years ago.

He's got youth on his side (he's 29 and Mayweather is 40), and he'll probably go in the ring much heavier than Mayweather after rehydrating following Friday's weigh-in. He's also got a reputation as a big puncher and the prevailing wisdom is he'll try to maul Mayweather much like Marcos Maidana did in their 2014 fight.

Other than that, everything favors Mayweather.

He's unbeaten in 49 fights as a pro and has a chance to pass Rocky Marciano on the perfect record list with win No. 50. Not only has he beaten every fighter put in front of him but he's found ways to deal with big punchers like Miguel Cotto, Diego Corrales and Canelo Alvarez.

He's also a pure boxer with an innate ability to adapt to any fighter put in front of him.

Mayweather is so confident of his chances that he's spent much of the week before his fight having meet-and-greets in the early morning hours at the strip club he owns not far from the T-Mobile arena where they will fight.

Though he's made hundreds of millions in the ring, Mayweather has a tax lien of $22 million to the IRS, so the lure of $200 million to come out of a two-year retirement and face a novice boxer was great. But he said this will be definitely be his last fight, and he wants to go out with a dominating performance.

"I gave my word to my children and once I did that it came to an end," Mayweather said. "What better way to go out than with a bang."

The fight is expected to match or surpass the 4.6 million pay-per-views sold for Mayweather's 2015 fight with Manny Pacquiao at $99.95 a household. Industry observers say people across the country will use the telecast as an excuse to party in tense times and 10 people could watch each pay-per-view.

Tickets in the arena haven't done nearly as well, largely because promoters wildly overestimated what people would pay to watch in person. Ringside seats were $10,000 and nosebleed tickets started at $2,500, though prices have been dropping rapidly as the fight approaches.
Report a correction or typo
Related topics:
sportsboxingsports
Copyright © 2020 by The Associated Press. All Rights Reserved.
More Videos
From CNN Newsource affiliates
TOP STORIES