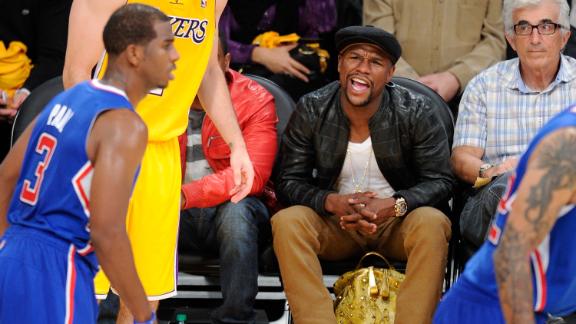 Another boxing superstar, Oscar De La Hoya, also said Tuesday that he'd be interested in owning a piece of the team as well.

Mayweather, who is a regular at Clippers and Lakers games, was speaking with reporters in a VIP lounge at the MGM Grand, where he will face fellow welterweight titleholder Marcos Maidana in a unification fight in a Showtime PPV main event Saturday night.

"I called Al today about that to see if me, Leonard and Al, and hopefully Richard and a couple of other guys, a couple other of my billionaire guys, we can come together and see what we can come up with," Mayweather said. "Hopefully, we can do it, and it's not just talk.

"With me, I can't come in talking about Mayweather only gonna get 3 percent, 4 percent. I got to get a solid percentage. Do we want to buy the Clippers? Yes, we do. We are very, very interested in buying the Clippers. We'll keep the Clippers right where they're at.

Mayweather, an avid sports gambler in Las Vegas, where he lives, added, "Once I get ownership in the Clippers I can no longer bet, so I have to stop that completely."

Mayweather, whose $73.5 million in minimum purses for his two fights in 2013 made him the world's highest-paid athlete, did not weigh in on the comments that Sterling made but said his interactions with the Clippers owner have been positive.

"Donald Sterling, he's been getting a lot of negative press, and my thing is this -- I don't have nothing negative to say about this guy," Mayweather said. "He's always treated me with the utmost respect. He has always invited me to games. Always. Has always told me, 'Floyd, I want you to sit right next to me and my wife.' I don't know about the [alleged] mistress. But I'm talking about him and the wife."

Schaefer, who is close to Mayweather and has been promoting his fights since 2007, said Mayweather was indeed serious about his interest.

"When he tells you guys he's interested in buying the Clippers, he's not just saying that for an interview," Schaefer said. "He's really serious about it and I'm sure he could rally the necessary people around him to support him in a bid like that."

De La Hoya, a retired six-division titleholder who is now president of Golden Boy Promotions, also expressed his desire to own a share of the Clippers.

"The league has made it known that it wants more minorities involved and, as a proud Mexican-American, I will bring a different perspective to the NBA in general, and the Clippers in particular," said De La Hoya, who has a statue in the Staples Center's Star Plaza outside the venue's front entrance. "I was born and raised in Los Angeles, I know what it takes to run a successful sports entity, and nothing would make me happier than to bring an NBA championship home to Southern California sports fans.

"I applaud NBA commissioner Adam Silver for his quick and decisive action regarding the Donald Sterling situation, and his forward thinking will push the league toward a positive future. There is no room for racism and unfair treatment in any professional sport, or in life in general. I hope to be a part of positive change for the league."

Billionaire and former music and film mogul David Geffen also could be a candidate, according to the Los Angeles Times.

"If the Clippers become available, he would be interested in buying the franchise," Geffen's office said in an email to the newspaper.

The potential buyers could include several other of the world's wealthiest men.

Magic Johnson, Mark Walter and their Guggenheim Partners group in the billion-dollar purchase of the Los Angeles Dodgers also are possible bidders, and real-estate tycoon Rick Caruso has indicated interest as well.

Patrick Soon-Shiong, the biotech billionaire often described as the richest man in Los Angeles, bought Johnson's share of the Lakers in 2010 but could be interested in owning a team on his own. Oracle CEO Larry Ellison attempted to purchase several sports teams in recent years but has been rebuffed despite his vast fortune.

For Mayweather, his own past issues with making racist remarks could prove to be a hurdle, as could his history of legal troubles and his affinity for gambling -- he has been known to often wager six-figure amounts on NBA games.

In 2010, he unleashed a profanity-filled rant in an Internet video against Filipino boxer Manny Pacquiao, with whom he has not been able to make a deal to fight in what would be boxing's biggest event.

In an approximately 10-minute Ustream video, in which Mayweather also repeated his assertion that Pacquiao used performance-enhancing drugs, he said, in part, "As soon as we come off vacation, we're going to cook that little yellow chump. We ain't worried about that. So they ain't gotta worry about me fighting the midget. Once I kick the midget ass, I don't want you all to jump on my d---. So you all better get on the bandwagon now. ... Once I stomp the midget, I'll make that motherf----- make me a sushi roll and cook me some rice."

Mayweather went to jail in 2012 for two months after pleading guilty to domestic violence and harassment toward the mother of his children. He was sentenced to 90 days but was released a month early for good behavior.