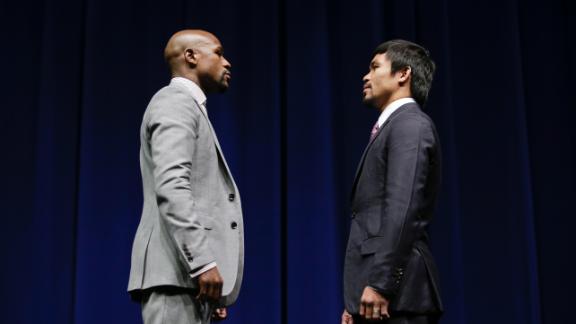 The bigger money is beginning to arrive at Las Vegas sportsbooks, a month ahead of the most anticipated fight the town has seen since Mike Tyson's heyday.


Undefeated champion Floyd Mayweather's odds are shrinking for his May 2 welterweight showdown with Manny Pacquiao at the MGM Grand Garden Arena. On Tuesday, a customer at the MGM Mirage placed two $50,000 bets on the underdog Pacquiao. The sportsbook responded by dropping Mayweather's odds to minus-180. He was an even smaller favorite at other books. When the fight was finalized in late February, Mayweather was listed as high as minus-275.

MGM assistant sportsbook manager Jeff Stoneback said that at his shop three times more money has been wagered on Pacquiao than on Mayweather. Sportsbook operator CG Technology reported overall bets were 6-1 in favor of Pacquiao.


There have been big bets on Mayweather, too. Two weeks ago, at the Westgate SuperBook, a casino guest placed a "large six-figure" wager on Mayweather at minus-190, according to assistant manager Ed Salmons. John Avello of the Wynn sportsbook reported taking a "small six-figure" bet on Mayweather.


Overall, though, Pacquiao is receiving the bulk of the action.


"Public on the 'dog," said Art Manteris, the sportsbook director of Station Casinos and a boxing expert. "Some of the best sports handicappers and guys I respect the most are on the favorite. I'm just not sure I agree with them this time."


The May 2 fight is taking place the same day as the Kentucky Derby on what promises to be an electric Saturday night in Las Vegas. Nearly a million dollars already has been bet on the fight at the MGM.


"For a month away, the handle is astronomical," Stoneback said.


More than $115 million was wagered on this year's Super Bowl at Nevada's sportsbooks. Avello, who has been a Vegas bookmaker for 20-plus years, says the amount wagered on the fight won't reach Super Bowl levels but will likely be the biggest fight he has booked.


"Hearns-Leonard, Tyson-Holyfield, those were big betting fights," Avello said. "It's different now. The whole biz feels different as far as boxing is concerned. But the action on (Mayweather-Pacquiao) is steady, big steady action. This is going to live up to the hype."

Making The Rounds: Money Going Away From "Money"
Jim Basquil and ESPN Chalk Insider Johnny Wilds discuss the changes in the betting line for the Floyd Mayweather Jr.-Manny Pacquiao fight since it was announced and what sorts of prop bets will be around the night of the fight.