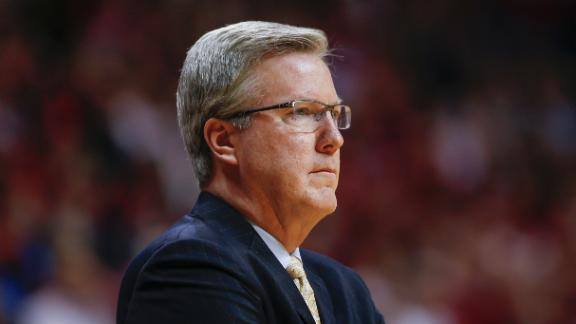 DAYTON, Ohio -- Iowa coach Fran McCaffery has arrived in Dayton to rejoin the Hawkeyes for their first NCAA tournament game in eight years.

He took a flight to Iowa City on Tuesday night to be with his son, Patrick, who had surgery Wednesday morning to remove a thyroid tumor. He will coach Iowa's game against Tennessee in the NCAA First Four on Wednesday night.

McCaffery said his son, who turns 14 Thursday, was in "good spirits" after the surgery.

"Today's surgery for my son went as planned," McCaffery said in a statement. "Doctors will continue tests in the coming days to determine further treatment.

"The outpouring of support and encouragement Patrick and our family have received this past week has been overwhelming; words cannot express how genuinely thankful we are to everyone who has offered their thoughts and prayers."

The other coaches led the Hawkeyes through their morning meeting and a light practice while McCaffery was in Iowa City.

His players' thoughts were with their coach.

"Coach McCaffery is our guy. We love him," guard Roy Devyn Marble said Tuesday. "We're all like family. Pat is a guy that's basically at practice with us every day. He's like our little brother, so I think as a unit we will rally behind it.

"%5BThe coach is%5D in a tough spot, so we're just trying to make this is as simple and easy for him as possible."

McCaffery, 54, is a Philadelphia native and a former standout at Penn.

He is in his fourth season at Iowa after head coaching stints at Siena and UNC-Greensboro. He also spent 11 seasons as an assistant at Notre Dame, where he met his wife Margaret, a former star basketball player for the Fighting Irish.

The McCaffery have three sons and a daughter.