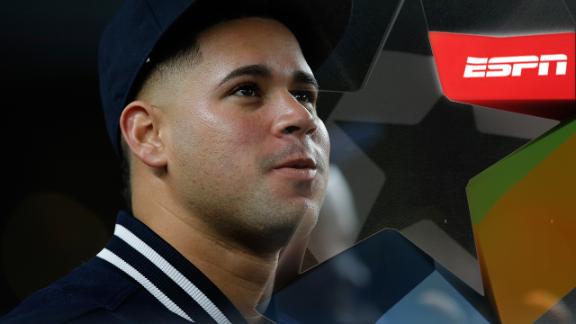 This interview was conducted in Spanish and has been translated.

Few rookies have made as much of a stir as Gary Sanchez, who played his first significant time for the Yankees last season: In just 53 games, Sanchez hit 20 home runs and had 42 RBIs, finishing second in AL Rookie of the Year voting. Though he missed time early this year with injury, Sanchez has come back strong and, along with teammate Aaron Judge, is among the most promising of New York's baby bombers. He spoke with Marly Rivera about his long wait to get to the majors and how he has adjusted since.

What was it like to start your career with the Yankees the way you did?

It was very exciting for me to get up here and do what I did. Every home run I hit, I was like, "Wow." But I am just proud to be up here with this organization.

It took a long time for you to get to the big leagues; do you think it worked out better this way for you?

I think it was better because the results have been better. You never know, maybe if I had been brought up earlier, I might not have done the work. I think it was for the best.

Did you get down on yourself when the Yankees first signed Brian McCann?

Well, as you know, those are management decisions. I was with them in the minor leagues, and whether they decided to bring me up or not, I still need to do my job, wait for my opportunity. I was always working hard in the minors, getting ready for my chance, for when my chance arrived. I think the timing was good. It happened when it needed to happen.

What did you learn the most from your experience in the minors?

I learned everything in the minor leagues because I spent over six years there. Everything I had to learn, I learned it there.

Did the time come when you got a little antsy?

Well, there were times when I said [to myself], "Wow, it's time for me to make it to the big leagues already," as you can imagine. Nonetheless, I had to be patient because if I was doing my job and the team still hadn't decided to bring me up to the big leagues -- what would it be if I didn't do my job? It would be worse. So I stayed focused and waited for my chance.

How difficult has it been for you to learn to speak English and address the media?

It's been difficult, to come from the Dominican Republic and having to learn English. But I am working on it to see if I can do an interview in English in a couple of years.

What has helped you most to improve your English skills?

Talking to my teammates, to my English-speaking American teammates. I talk to them. When I say something wrong, they correct me. It's better for me to practice with them because we talk baseball. And the first things you have to learn [in English] are about baseball, so it's easier later on.

Tell me about that moment in Miami when you eliminated Giancarlo Stanton.

I went there to enjoy myself, to have fun. I was invited to the Home Run Derby, and that's a competition for the fans and for one to have fun. I was going to be ready to compete no matter who I was facing, try hit home runs and do my job. And thank god I went on to the second round, and that was a good time.

Was it fun competing alongside your teammate Aaron Judge and representing the Yankees the way you guys did?

What Aaron Judge did was impressive. I think there was no one who could compete with him out there because with what he was doing, he just made it look so easy.

What is it like for you to be part of this young Yankees generation, especially for you, who started with a team full of veterans?

It feels good to play with my young teammates, many of whom I also played with in the minor leagues, and also some veterans here. It's a [good] combination.

Was it always your dream to play for the Yankees?

Well, I was a Yankees fan. I've always been a fan. When they signed me I was like, "Wow, my team signed me." And now I'm here in the major leagues with them.

When you were a kid, who was your favorite player?

Manny Ramírez. I liked his style, the way he played. He had fun playing the game. He used to go out there to play and he had fun, and that was what I liked the most. He didn't let pressure affect him. Manny was always relaxed, as if nothing was going on. And I've always liked that.

Are you like Manny, in that sense that you try to be cool under pressure?

I try to be calm in high-stress situations. I try to relax as much as I can so I can do a good job.

You don't have a traditional slugger stance. How did you develop your current batting stance?

Well, I try to make adjustments throughout the season. If something is not working for me in a particular way, I try to change it, and I think that the stance I have now helps me perform better. If that doesn't work for me in a month, I will adjust it.

So are you not someone who always tries to keep the same positioning at the plate?

I try to look for ways to play [better]. For example, if I see that I'm not doing my job, I try to stand a little straighter or open up my stance a little more. Things like that, small adjustments.