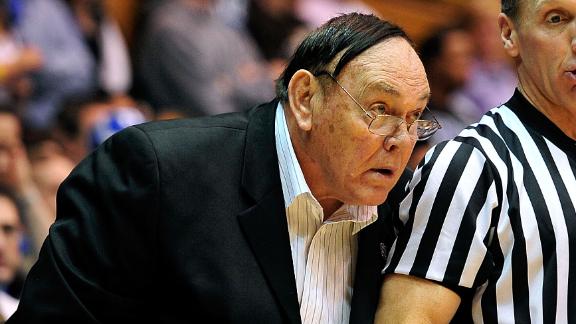 If Gene Keady was known for anything during his years as Purdue's men's basketball coach -- other than becoming the winningest coach in school history -- it was his infamous comb-over hairstyle, which he maintained for years (to the tune of $600 a week) before ditching it for good last year.

The secret to the look? Extensions, of which Keady was an early adopter.

"Men were just starting to get extensions, so why not?" he told the newspaper.

Keady's personal hairdresser went to his house twice a week, armed with the extensions and hair dye, to maintain the look -- at a cost of $300 a visit. Keady kept it up until January 2013, when his wife, Kathleen, finally convinced him to undergo a makeover.

"Coach thought it was pretty dapper," she told the Star. "I think it was horrible. I mean, it was really weird-looking . . . And he's already so stern-looking. But with that hairdo, it was like Halloween or something."

It turned out his wife really did know best. Underneath the hair, they found squamous cell carcinoma, a common form of skin cancer.

"It's possible he wouldn't be here today if he'd kept that hair," Kathleen said.