Gerald McCoy forgives teen who broke into home, asks people to pray for him 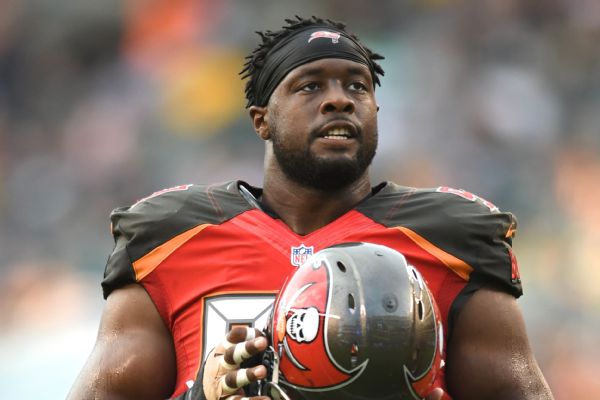 McCoy also had a message for the person who did it: "I forgive you."

"I would just ask that people pray for the kid who tried to break into my house," said McCoy, who wasn't home when the incident occurred.

His father, 59-year-old Gerald Sr., was home during the incident. He suffered a broken wrist when confronting the burglar, who was identified as Justin J. Frazier, a 17-year-old runaway with arrest warrants in Hillsborough County and Polk County in Florida.

"Just a lost kid," said McCoy, a father of four, who was in meetings at the team hotel in Tampa, when Frazier entered his home through an unlocked door at 3:58 p.m. "[He] probably just needs some guidance. Ain't nothing to be upset over. It happens."

After a scuffle with McCoy Sr., Frazier fled on foot, leaving behind a backpack with an Xbox One taken from McCoy's home, along with an Airsoft-style gun and other stolen property. According to police, Frazier pulled one of the pellet-style guns on McCoy Sr.

McCoy Sr. is back in Oklahoma and may attend his son's game Sunday. McCoy said his father was in good spirits when they talked on the phone the other day. McCoy Sr. had gone to church and even played the drums, despite the injury. McCoy himself seemed to be in better spirits.

"You can look at it a different way -- you can look at it as, 'Aw, I hate the person who tried to break into my house' or you can look at it as 'somebody who needs help,' " said McCoy, who, along with his wife Ebony, adopt several families each year for the holidays and are known for their philanthropy work, even donating nearly $20,000 to the Pediatric Cancer Foundation over the past two years.

"I would just advise people to just pray for him. Just a kid who is lost and thinks that that's the way to make it, and it's not."

McCoy said he may even visit the teen in hopes that he can help him.