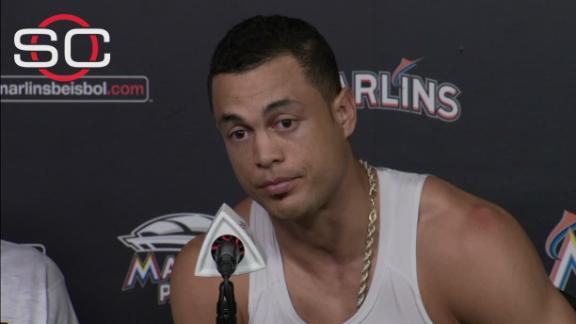 MIAMI -- Giancarlo Stanton hails from the "Show, don't tell" school of baseball leadership. When a hitter stands 6-foot-6 and 245 pounds, dominates the Home Run Derby, dents scoreboards with regularity and induces panic attacks while he's standing in the on-deck circle, it borders on overkill to speak in a commanding tone of voice.

Stanton has a $325 million contract and three All-Star Games on his résumé, so the laid-back Southern California style suits him well. His approach to baseball and life in general contrasts mightily with that of late teammate Jose Fernandez, whose fiery, alternately comical and confrontational style made him worth the price of admission. They were indisputably the two best players on theMiami Marlins' roster, butStanton led primarily by example, while Fernandez relied on velocity, torque and a smile that made him a force of nature.

Now Fernandez is gone -- the victim of a tragic boating accident at age 24 -- and Stanton stands alone as Miami's resident superstar. If a single gesture shows that he has the shoulders to carry the burden, it came shortly before the Marlins took the field against the New York Mets on Monday night.

The Marlins' pregame ceremony for Fernandez was a predictably solemn occasion, with an understated rendition of "Take Me Out to the Ballgame"' on trumpet, a color guard and contorted faces trying to hold back tears. The emotions built even more when the Marlins knelt in the dirt and inscribed personal messages to their late, beloved teammate.

Eventually, a game had to be played, and as the Marlins prepared to take the field, a single face and voice stood out from the crowd. There was Stanton, with red-rimmed eyes and a gray No. 16 adorning his black Marlins cap, exhorting his teammates to put their grief aside for a few hours and play the game the way Jose would have wanted. When he finished talking, he thrust a finger in the air, and every other hand in the scrum shot skyward to meet it. Stanton didn't plan his sermon from on high. It just happened.

"Honestly, I went kind of numb in that moment," Stanton said. "A lot of us were talking about, 'Why are we here right now? What's the main purpose of this? How do we get through this together?' I was just trying to ease all that. I told them, 'We're here for Jose and his fans and everyone to come together. We're the last hope and the last heart for him.'"

There were multiple displays of grace, sportsmanship and people rising to meet the occasion during the Marlins' 7-3 victory over the Mets. Right after the national anthem, the Mets crossed the field and met the Marlins in an inspiring display of baseball brotherhood. Just how classy a gesture it was dawned on Stanton when pitcher Jacob deGrom, his right arm encased in a cast and a sling, attempted to reach out in an effort to console him.

Miami second baseman Dee Gordon, a spindly bundle of emotion and tears, set the tone for the evening when he launched his first home run in 74 games this season on his first swing against Bartolo Colon. For the sake of improbability, timing, karma and bolt-from-the-heavens-caliber shock value, it might have been the closest thing to a miracle that baseball has seen since Mike Piazza's post-9/11 home run against the Atlanta Braves.

The Marlins were conflicted throughout the evening. They knew that playing a game might be the best thing to distract them from their grief, but they were too sick in the pits of their stomach for that to matter.

There were some strange what-ifs and extenuating circumstances surrounding Fernandez's pitching schedule that added to everyone's sense of anguish. Fernandez was originally scheduled to pitch Sunday. But the Marlins bumped his start back to Monday because he had gone eight innings and 111 pitches against Washington his last time out, his innings total had surpassed 180, and the team wanted to get lefty Adam Conley back in the mix after six weeks on the disabled list. Might Fernandez have refrained from taking that boat ride late Saturday night if the Marlins had stuck to the original plan? As maudlin as that sounds, it's a hard question to avoid.

"If Jose had pitched yesterday, maybe fate would be different," club president David Samson said before the game. "I've been thinking about that a lot. There's been a lot of talking, a lot of crying, a lot of praying and a lot of trying to make sense of something we can't make sense of."

Manager Don Mattingly, the ultimate straight shooter, admitted that he too had tossed different scenarios around in his head since the news of Fernandez's death.

"Obviously, it crosses your mind," he said.

Conley, taking the mound in Fernandez's place Monday after Sunday's game against Atlanta was canceled, treated the appearance with the requisite deference. He refrained from stepping on the mound during the pregame tribute because he felt it was Fernandez's domain and he was merely renting the space for the evening. After throwing three shutout innings and giving way to the bullpen, Conley was exhausted to the core.

"Nothing I felt today had anything to do with pitching," Conley said. "I don't even know what I did out there. I've never been more tired in my life after throwing 45 pitches. These words are going to come out of my mouth, and they might sound heroic from me, but I know that all those guys in that clubhouse haven't eaten much and haven't slept much in two days."

The only thing the Miami players planned Monday -- other than everyone wearing No. 16 -- was choosing batting practice tunes and walk-up music in line with Fernandez's tastes. The unscripted nature of the evening left room for moments of poignancy and even comedy.

One such interlude came in the third inning, when lumbering first baseman Justin Bour legged out his first career triple (in almost 750 big-league at-bats) and punctuated the occasion with a belly flop and a muscle pose for the dugout. Hitting coach Barry Bonds was particularly amused by the spectacle.

After the game, the Marlins formed a circle and tossed their caps on the mound in honor of Fernandez. Mattingly bent down and kissed the dirt, simply because it brought him a little closer to Fernandez in spirit.

In the course of surviving the evening, the Marlins tapped a well of emotional reserves they probably didn't know they had.

"Strength came tonight," Stanton said. "We all dug as deep as we could, and we gave all we had. But we still have a plane ride without Jose, bus rides without him and rookie hazing without him. It will take some time."

The victory notwithstanding, tears continued to flow in the clubhouse after the game. The Marlins have two more games against the Mets, followed by a day off that they will most likely spend at Fernandez's funeral. Then the season ends with a series in Washington. For the next few days, the mere act of putting one foot in front of the other will pass for a triumph of competitive will.

"It doesn't feel real," outfielder Christian Yelichsaid. "Jose's locker is still over there the way he left it. I kind of just expect him to walk through those doors. It's going to take a while for it to set in that it's not going to happen. I don't know if we'll ever completely get over this." 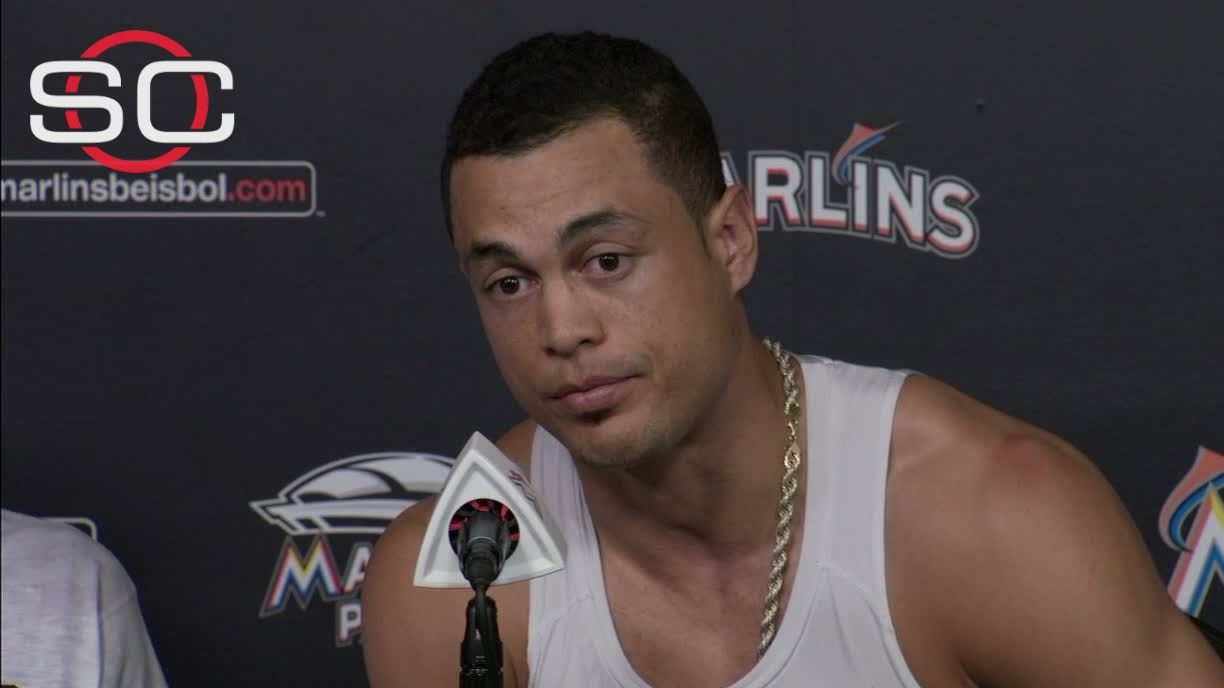 Stanton, Marlins play for Fernandez and his fans
Marlins outfielder Giancarlo Stanton explains how he and his teammates have been trying to help each other in the aftermath of Jose Fernandez's death.

Marlins leave hats on mound for Fernandez
After beating the Mets 7-3 on Monday, the entire Marlins team circles the mound and leaves their hats as the crowd cheers "Jose."

Gordon honors Fernandez, then homers
Miami's leadoff hitter, Dee Gordon, starts his at-bat by stepping in the right side of the batter's box to honor Jose Fernandez. Then Gordon hits his first home run of the season to right field. 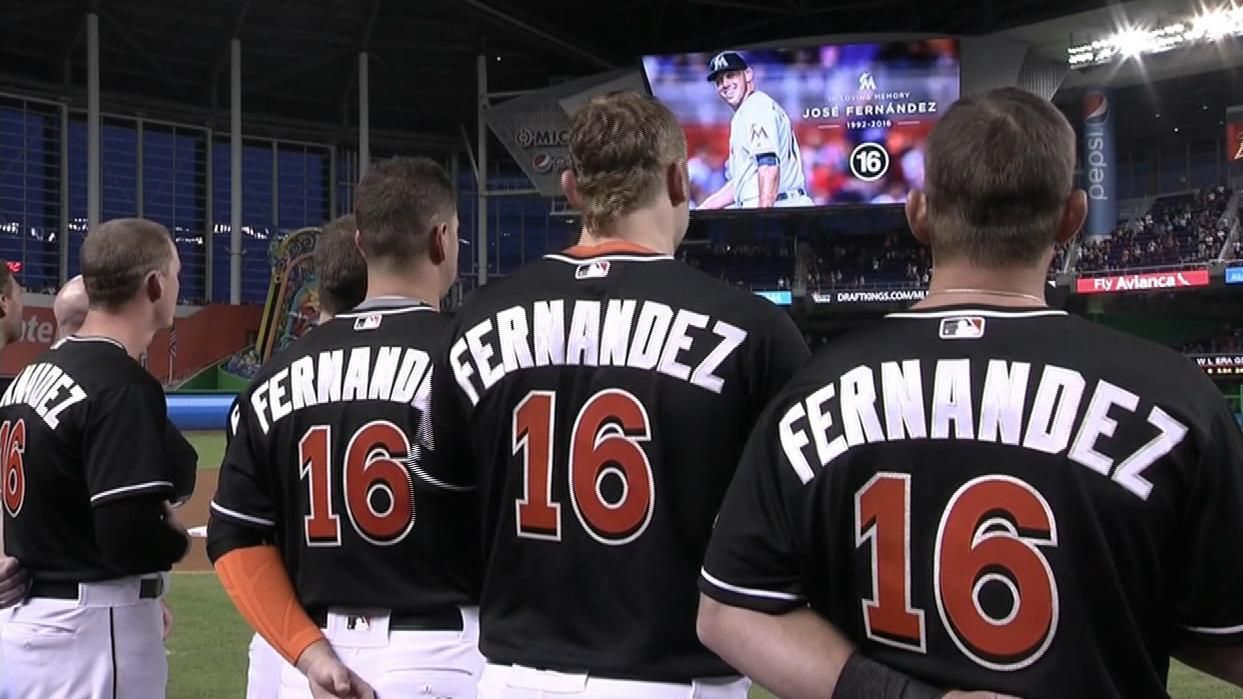