Giants GM: QB Eli Manning on a 'pitch count' to keep him fresh 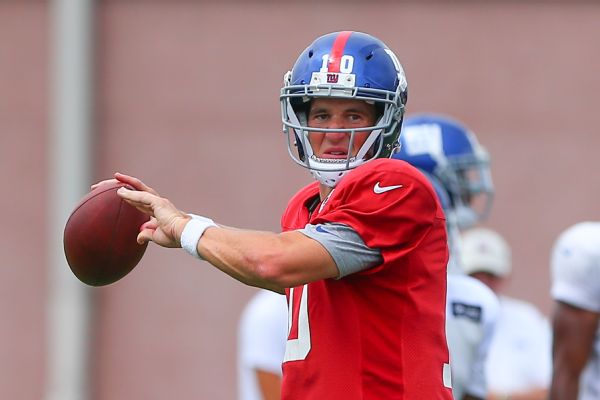 EAST RUTHERFORD, N.J. -- The New York Giants are ready to ease up on quarterback Eli Manning as he enters his 14th professional season. He may even be on a football "pitch count" with his throws limited as the summer and season progress.

It seems almost sacrosanct for an ironman quarterback who has never missed a start. But it seems likely to be Manning's 2017 reality.

"You can call it a pitch count. You can frame it like that, you can frame it however you like," general manager Jerry Reese said Thursday, some 24 hours before the Giants' first practice of training camp. "That's a good way to frame it if you like."

Manning, 36, is coming off a sub-par season where he was constantly under pressure. He finished with 4,027 yards passing with 26 touchdowns and 20 turnovers.

Manning constantly said his arm wasn't a problem. When he was asked after the season if he was bothered by a hand injury, Manning shook off that suggestion as well. He claimed to be fine physically and didn't think his arm was a problem.

Manning, who two years ago reworked his throwing regimen to improve his arm strength, had seven touchdown passes and seven interceptions in the final six games of the season.

"I don't know if that was an issue or not, but that is something that we have talked about," Reese said. "We want to make sure that he is fresh in the games late in the year and hopefully going into the playoffs. We want him to be fresh and ready to go."

Even though Manning has proven indestructible physically throughout his career -- the opener against the Dallas Cowboys will be his 200th consecutive start -- he's inevitably closer to the end of his career than the beginning. Reese used the term "back nine" after the season.

The Giants are being proactive as they enter a season where they have high expectations.

"I think it is just common sense. You see it all around the National Football League. I think [Tony] Romo, one year there was one day where he never practiced. I think it was on a Wednesday or something like that," Reese said. "You see it all over the league with older players, coaches give them some time off or some reps off and we have some older players at different positions that we want to have fresh going into the games and the latter part of this season and again hopefully the playoffs."

There isn't a specific plan of where or when to back off Manning's throwing. Reese said it will be up to coach Ben McAdoo to make those decisions. McAdoo will be aided by the Giants' analytics, GPS data and his assistants.

It's not just Manning who could be backed off during practices this summer and season. There could be other veterans who face a similar approach. Brandon Marshall (30), Jonathan Casillas (30) and Dominique Rodgers-Cromartie (31) are other sensible options. They're all veterans who have dealt with injuries over the past few years.

Like it or not, Manning is in that group. He's the oldest player on the Giants roster.

Reese said the Giants have taken some snaps away from Manning in recent years in order to preserve his arm and body. It has been met with encouraging results. The veteran quarterback may like taking every snap, but he doesn't have to in order to be ready for games.

"All competitive players want to play," Reese said. "They want to stay out there, they want to take every rep, but he is a smart guy, too, so that is between the coaching staff and him and that is up to the head coach to look out for the pitch count, if you want to call it that, but it will happen with a few players across our team."