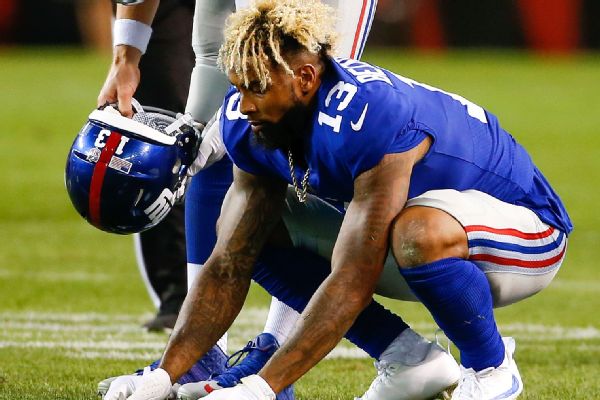 EAST RUTHERFORD, N.J. -- TheNew York Giantsbelieve there is a "good chance" wide receiver Odell Beckham Jr. will play Monday night against the Detroit Lions, but the decision is still "up in the air," a source told ESPN's Adam Schefter.

The team will know more about Beckham's status after Sunday, the source said.

Beckham, who missed the Giants' opener last Sunday night against the Dallas Cowboys, was officially listed as questionable for the second straight week because of an ankle injury. He was a limited participant in practice Thursday and Friday, his first two practices since getting hurt on a hit by Cleveland Browns cornerback Briean Boddy-Calhounfour weeks ago.

"The biggest thing is, you don't want to put a player out there that is going to do any harm to himself or injure himself any more than he is," Giants coach Ben McAdoo said Saturday. "It is an injury. It's a tough injury. He's fighting through it and doing everything he can to get back, but we're going to be smart with him."

The Giants didn't practice Saturday. Instead they spent the afternoon at the team facility taking care of their bodies before a workout Sunday at about 85 percent.

Beckham is expected to be a game-time decision Monday night.

Hart, Robinson and Beckham were all limited during Friday's practice. Beckham ran some routes against air but was more involved than the previous day. He also did some running and skipping during warm-ups and made an impressive one-handed, left-handed grab in the back of the end zone during an offensive drill.

It's progress after Beckham did not practice and worked on the side with trainers most of last week. He admittedly wasn't close to playing against the Cowboys.

This week there appears to be more optimism.

Beckham said Thursday that he was dealing with a 6-8 week injury. But that timetable could vary or change depending on the individual.

The Pro Bowl receiver has spent endless hours at the facility and at home treating and rehabbing the injury. Beckham said Thursday he "felt good" and was itching to get back on the field.

The Giants' offense could use Beckham after struggling in a 19-3 loss to the Cowboys in Week 1. Wide receiver Brandon Marshall caught one pass (in the final moments) for 10 yards. Quarterback Eli Manning threw for just 33 yards in a first half where the offense produced a grand total of two first downs.