GM Brian Cashman says he'll continue to be with Yankees 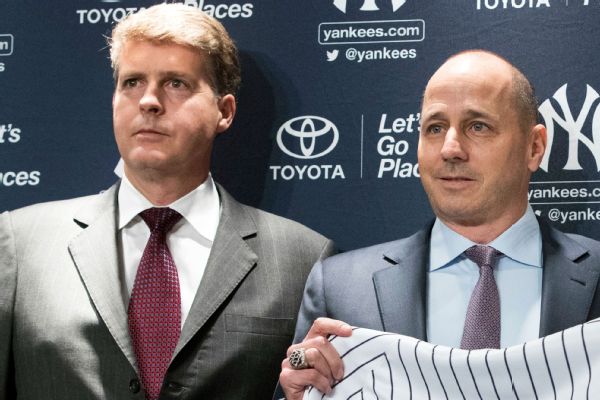 LAKE BUENA VISTA, Fla. -- Brian Cashman confirmed he will return as the general manager of theNew York Yankeesfor the foreseeable future, saying an expected new deal has been agreed upon.

There have been reports, first by USA Today Sports, that Cashman's new contract is for $25 million over five years. Cashman he told reporters Monday that the "numbers aren't necessarily accurate," but he did not clarify.

It is not a surprise that Cashman, who has served in the role since 1998, is back. Even as his contract expired, he was the one who recommended to owner Hal Steinbrenner to let go of Joe Girardi and hire new manager Aaron Boone.

"I want him to stay, and he's going to stay," Steinbrenner said without providing specific details about the deal.

Cashman said he didn't even think about leaving.

"At the end of the day, like, I wasn't intending to go anywhere, never had an interest in going anywhere," Cashman said. "So I had told Hal straight up, 'Like, listen, let's just try to work through this and get it behind us, because I have no intent of jumping ship.'"
Report a correction or typo
Related topics:
sportsespnmlbhal steinbrennerbrian cashmangmnew york yankeescontractyanksgeneral managernyy
Copyright © 2022 ESPN Internet Ventures. All rights reserved.
TOP STORIES
Buffalo suspect had plans to continue killing, commissioner says
Travel Advisory issued in NYC for Monday due to severe storms
Alleged gunman in Buffalo shooting asked to leave store day before
Hero security guard, shoppers among Buffalo shooting victims
NYPD steps up patrols, Adams to speak at vigil in wake of massacre
AccuWeather Alert: Gusty storms
2 killed in fiery crash in the Bronx
Show More
McDonald's leaving Russia altogether amid Russia-Ukraine war
Pres. Biden announces plan to ease burden of housing costs
9-year-old girl found dead in Brooklyn apartment
Rangers beat Penguins 4-3 in Game 7 OT
In Ukraine and internationally, scenario darkens for Russia
More TOP STORIES News