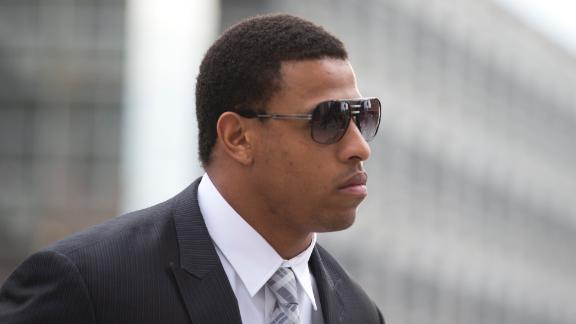 The decision to seek reinstatement came on the heels of a U.S. District Judge ruling on Thursday that an NFL arbitrator "failed to meet his duty" in a child abuse case against Minnesota Vikings running back Adrian Peterson.

That opened the possibility that Peterson will be reinstated before his suspension was set to end on April 15.

But NFL spokesman Brian McCarthy said in a statement Thursday that the morning's Peterson ruling was irrelevant to Hardy's bid for reinstatement.

"He [Hardy] hasn't been disciplined," McCarthy said. "There is nothing for him to ... seek reinstatement from at this point."

Hardy was placed on the NFL's exempt list in mid-September until his domestic violence case was resolved.

Charges that he assaulted and threatened to kill ex-girlfriend Nicole Holder were dropped on Feb. 9. The district attorney's office said there was no choice because Holder refused to cooperate after reaching a financial settlement with Hardy.

The league then opened its own investigation into whether Hardy violated the league's personal conduct code, saying the 2013 Pro Bowler would remain on the exempt list until that was completed.

Thursday's ruling in the Peterson case raised issues that could work in Hardy's favor.

U.S. District Judge David Doty supported the argument of the NFL Players Association in its suit against the NFL that Peterson should not be subject to the league's new personal conduct policy because that policy was not instituted until late August.

Peterson was involved in a child abuse incident in the spring of 2014.

In December, former U.S. District Judge Barbara Jones took the same stance on the NFL's decision to extend the initial two-game suspension of then-Baltimore Ravens running back Ray Rice after the release of a second video showing Rice striking then-fiancee Janay Palmer in a casino elevator.

That incident occurred in February 2014.

Hardy was arrested on May 13. He did not play in Carolina's final 15 regular-season games or two playoff games, but received his full $13.1 million salary as the franchise tag player.

He is scheduled to become an unrestricted free agent on March 10. The Panthers are not expected to re-sign him, but there has been lobbying from teammates for that to happen.

ESPN business analyst Andrew Brandt said the Peterson ruling should work in favor of Hardy if the NFL tries to suspend him for six games, the minimum under the new policy.

Brandt said the ruling would favor Hardy getting at most a two-game suspension, which was the standard set by the initial Rice suspension before the new policy was adopted.

That would favor any team that signed Hardy in free agency.

"This is all the same thing," Brandt said. "It's all the same argument. Now this doesn't mean the NFL can't apply a six-game suspension, and then we're going back to court and arbitrations and hearings and maybe Hardy wins in Doty's court down the line.

"But you would think the NFL being reprimanded twice in two different jurisdictions that they would take the lesson to not implement any new conduct discipline based on conduct that occurred in the spring of 2014."