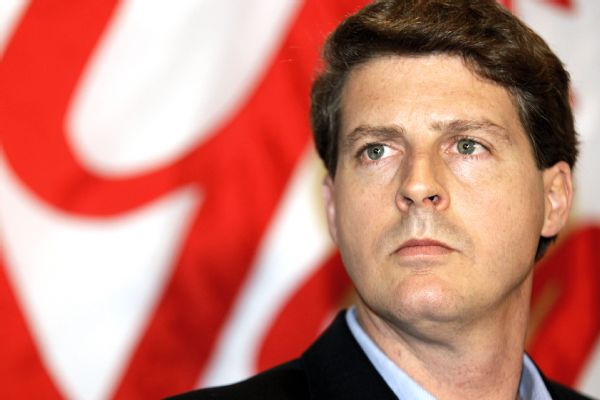 NEW YORK -- The Yankees may be buyers, not sellers, as the July 31 trade deadline approaches.

Led by young stars Aaron Judge and Gary Sanchez, the retooled Baby Bombers began Wednesday leading the AL East at 23-13, a seven-win improvement over last year at this time. Owner Hal Steinbrenner said New York's starting pitching has been a pleasant surprise to him, and he will consider making roster additions -- but will not trade top prospects.

"We're going to see where we're at, what options are available and what those options would cost," he said at the baseball owners' meetings.

"We actually have young players for fans to be excited about, particularly the millennials, who are always Facetiming and Snapchatting," Steinbrenner said. "They do these Facetime interviews and these Twitter question-and-answer things that 10 years ago none of us would be talking about, and I still don't understand, but they do them and clearly younger fans are really enjoying it."

There has been an impact at the team's merchandise stores too.

"There's no doubt the Judge jerseys right now and the Sanchez jerseys are selling well. But they got to perform well in order for that to happen," Steinbrenner said. "They have to be good young players that can actually produce in New York City."

While Steinbrenner evaluates deals to strengthen the team's roster, he also wants to get the team's luxury tax payroll under $197 million next year, which would reset the Yankees' tax rate from 50 percent to 20 percent in 2019. That is the first season after the free-agent class that includes Bryce Harper, Manny Machado and perhaps Clayton Kershaw, who can opt out of his contract at the end of the 2018 World Series.

New York has paid the tax every year since it began in 2003, and the Yankees opened this season with a $212 million payroll, once again putting them over the luxury tax threshold. CC Sabathia, Michael Pineda, Tyler Clippard and Matt Holliday can all be free agents after this season, and Rodriguez's deal ends, removing just over $74 million in luxury tax payroll going to these five players.

Steinbrenner repeatedly has said getting under the threshold is a goal. Next season is the first time the Yankees realistically can achieve it.

"Clearly there's a very good chance of that and at the same time still having a significant amount of money to spend where we feel we need to spend it," he said. "To what degree and in what areas remains to be seen."

Yankees general manager Brian Cashman had recommended the Yankees retool, but Steinbrenner and the team's top executives agreed to trade Miller and Beltran only after New York was swept in a three-game series at Tampa Bay just before the deadline in order to make trades without first securing waivers.

"We simply had spots on the roster that weren't available to guys like Sanchez and Judge that truly deserved a chance and were ready," Steinbrenner said.

Several of the Yankees' top prospects are at Double-A Trenton, including infielder Gleyber Torres and pitchers Chance Adams and Justus Sheffield. Torres, just 20, was selected the top player in the Arizona Fall League last year.

"He's very mature for his age," Steinbrenner said about Torres. "I think he's going to come [up] fast. I just don't know how fast. Long way to go."

Steinbrenner is not concerned about the shoulder injury sidelining Chapman, who re-signed with the Yankees as a free agent.

"He is a physical specimen, and he says he's had this issue in the past," Steinbrenner said. "I had the same exact thing a few years ago because I waxed too many cars in a two-day period. Morning of the third day I couldn't lift my arm."

Steinbrenner had a quick quip about Rodriguez making his broadcast-booth debut with FS1 for the Yankees' game at Kansas City on Thursday. He will be paired with play-by-play man Kevin Burkhardt.

"He's done pretty well. That may be a future for him," Steinbrenner said. "Judge may be a comedian some day. You never know what hidden talents lie within all of us."

Steinbrenner also would be happy if the Derek Jeter-Jeb Bush group is successful in its bid to buy the Miami Marlins. He compared Jeter's potential ownership role with Don Mattingly's managerial career with the Los Angeles Dodgers and Marlins.

"Seeing Mattingly as a Dodger manager or a Marlin manager was a little odd, because I always think of him as a Yankee, was always one of my favorites growing up," Steinbrenner said. "If this is a dream of his, being involved at a high level in a major league club, it doesn't matter to me which league or which team, quite frankly. We just wish him the best."
Related topics:
sportsespnaaron judgetrade deadlinehal steinbrennernew york yankeesmatt hollidayyankstyler clippardgary sanchezcc sabathiamichael pineda
Copyright © 2022 ESPN Internet Ventures. All rights reserved.
TOP STORIES
Police release photos of suspected gunman in Q train fatal shooting
3 women killed by alleged drunk driver after leaving Sweet 16 party
Boy Scout suffers minor injuries in bear attack at NY campsite
Last public pay phone in NYC removed from streets
Nurses, techs at NJ hospital stage strike over working conditions
15 arrested after NJ pop-up party that sparked 9 p.m. curfew
Man charged in execution style murder during motorcycle buy meeting
Show More
'American Idol' winner talks plans for the future
AccuWeather: Sun and clouds, breezy and cooler
Teen who drowned in NJ reservoir identified
Weekend storms in NY down trees, leave more than 1,000 in the dark
Taxi drivers rally for raises, per trip increase for customers in NYC
More TOP STORIES News