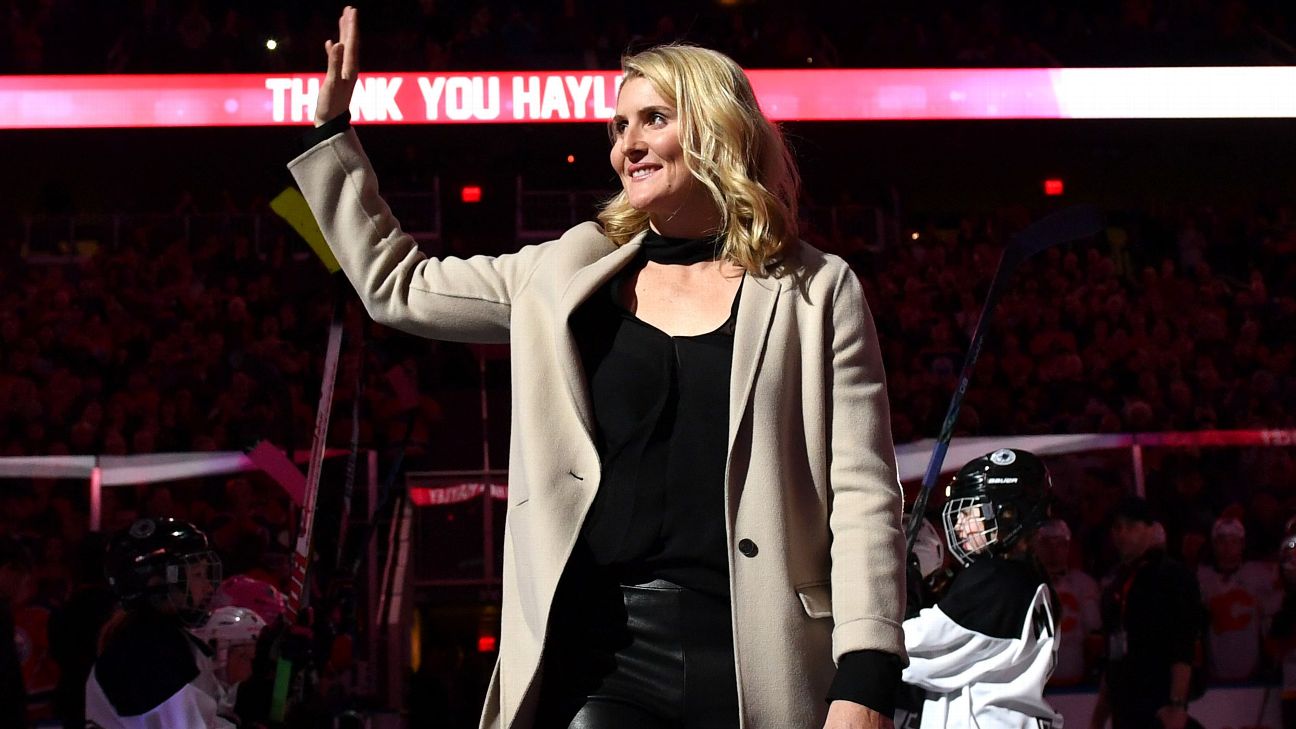 TORONTO -- Hayley Wickenheiser, regarded as the greatest player in the history of women's hockey, joined five others in the Hockey Hall of Fame Class of 2019 induction on Monday in Toronto.

Wickenheiser played 23 years with the Canadian women's national team, helping it win four Olympic gold medals and seven International Ice Hockey Federation world championships. She retired as the leading scorer in Olympic women's hockey history, with 18 goals and 33 assists in 26 games, and was Canada's flag bearer at the 2014 Winter Games in Sochi.

Wickenheiser was a trailblazer in the sport. She became the first woman to play full-time professionally, in a position other than goaltender, when she suited up with HC Salamat, a Finnish men's team. Called "one of the game's great ambassadors" by Hall of Fame chairman Lanny McDonald, Wickenheiser is currently assistant director of player development for the Toronto Maple Leafs while going to medical school at the University of Calgary.

"I think we've come a long way in hockey," she said during Monday's ceremony before mentioning her two young nieces in the audience. "If they decide they want to play hockey, they can walk into a hockey rink anywhere in Canada with their hockey bag and their hockey stick, and nobody's going to look twice. They don't have to cut their hair short and run into the bathroom and try to look like a boy like I had to do to try and blend in. Their road is just a little bit easier, and I want to thank everyone that made the road just a little bit easier for me."

Carbonneau played 1,318 NHL games and captured the Stanley Cup three times, twice with Montreal and once with Dallas. He is considered one of the best defensive centers in league history, winning the Selke Trophy for best defensive forward three times and finishing in the top four for the award eight times. He has been eligible for the Hall of Fame since 2003.

"The good part now? When people ask me in the street if I'm in the Hockey Hall of Fame, my answer will be yes," Carbonneau said.

Zubov was the antithesis of Carbonneau: a Russian-born player who was a finalist for the Norris Trophy, given to the NHL's best defenseman, just once in his 1,068-game career. But after his retirement in 2009, there was a reassessment of his career through an analytic prism, and Zubov's offensive consistency and defensive prowess were seen as criminally overlooked during his career.

"There's a lot of guys like that during that era. Whether they were centers or defensemen, there were so many top dominant guys," Brett Hull, a 2009 inductee, said. "So there were players that maybe didn't get the accolades that the other guys did. Imagine having a great year with 100-and-some points, and then you look up, and there's Gretzky and Lemieux 50 points ahead of you. It was hard to get up to those top three guys."

Known as "Big Ned," Nedomansky won Olympic silver and bronze as a legendary player in Czechoslovakia. He defected in 1974, playing just over three seasons in the World Hockey Association with the Toronto Toros and the Birmingham Bulls. At 33, he joined the NHL and played for the Detroit Red Wings, St. Louis Blues and New York Rangers.

Rutherford was a journeyman goalie in his 13-season NHL career before he moved into management. In 1994, he became director of hockey operations and a part-owner of the Hartford Whalers, eventually moving to the Carolina Hurricanes when the team relocated. He built a Stanley Cup winner in 2006 with the Canes, but it was his second act that made him a Hall of Famer in the builder category: taking over the then-floundering Penguins in June 2014 and winning back-to-back Stanley Cups in 2016 and 2017.

Rutherford was inducted by a Hockey Hall of Famer, and his boss, Penguins co-owner Mario Lemieux.

"It means a lot. Jim's a good friend of mine, good friend of our family. He deserves it," Lemieux said. "We were lucky enough to hire him a few years ago. He said he was coming to Pittsburgh for a chance to win another Cup. And he won us two."

York made some waves in the Toronto media by choosing to coach Boston College in its game against Vermont this weekend rather than attend some of the Hall of Fame events. The Eagles won both games.

York credited three former coaches with helping him develop: U.S. Olympic legend Herb Brooks, former Penguins coach Bob Johnson and Islanders general manager Lou Lamoriello, all of whom are in the Hockey Hall of Fame. He also credited his players.

"We're not coaching pucks. We're coaching people. And I've had some great experiences with them," York said.

This year's class included some players on the men's side who had been waiting for their call, but next year should have a first-ballot inductee: former Calgary Flames star Jarome Iginla, who is 16th all time with 625 goals scored.

Among the players in the mix in 2020 are first-year-eligible player Shane Doan, a winger who played his entire career with the Coyotes organization; Daniel Alfredsson, the Ottawa Senators star who has been passed over in three classes; Alex Mogilny, the first Russian player to defect and an offensive dynamo who has been eligible since 2009; and Jeremy Roenick, the brash former Chicago Blackhawks star who had 1,216 points in 1,363 career games. He has been eligible since 2012.