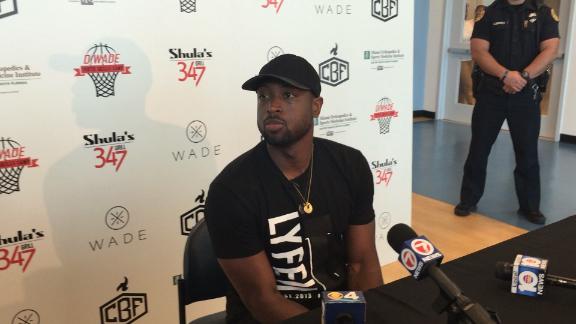 MIAMI -- Longtime Miami Heat captain Udonis Haslem saidDwyane Wade's free-agency departure to Chicago could have been avoided, but that his close friend and former teammate was dealing with lingering frustrations that "came to a head" last week.

Wade turned down a two-year, $41.5 million offer from Miami amid acrimonious negotiations with team president Pat Riley and instead accepted a two-year deal worth $47 million from the Chicago Bulls. Wade walked away from the Miami, where he spent the first 13 seasons of his career and helped guide the Heat to five trips to the NBA Finals and three championships as the franchise's career-leading scorer.

Wade's move leaves Haslem as the lone remaining player who has been a part of all three of the Heat's championship teams in 2006, 2012 and 2013.

"I wanted him to come back, but I just know, personally, there were a lot of things he was feeling that, I guess, maybe just came to a head at this particular time," Haslem said during a conference call Tuesday to announce his one-year deal to return to Miami. "For whatever reason, we -- the organization -- and him, couldn't get to an agreement."

Haslem then referenced last summer's free-agency controversy when center DeAndre Jordan agreed to sign a max deal with the Dallas Mavericksbut reneged after teammates Chris Paul and Blake Griffin convinced him to return to the Los Angeles Clippers. Haslem, 36, somberly joked that he should have considered a similar tactic to get Wade to come back to Miami.

"In hindsight, I don't know, I think I should have come in and pulled a Chris Paul and handcuffed him like they did DeAndre Jordan and made him change his mind," Haslem said. "I don't know if there was anything I could have done or should have done. But I felt like it could have been avoided. For whatever reason, it just wasn't."

The Heat used the salary-cap space that was set aside for Wade to instead bring back Haslem and add role players Derrick Williams, Wayne Ellington, Willie Reed and Tyler Johnson, among others, in one of the team's most drastic makeovers in six years.

Wade acknowledged Saturday that his differences the past two seasons with Riley in contract negotiations were a major factor that led to him finally leaving the franchise that selected him No. 5 in the 2003 NBA draft. Wade, 34, has never been the Heat's highest-paid player during any of his 13 seasons. Tension over Wade's contract status arose in 2014, when Wade, LeBron James and Chris Bosh opted out of their contracts to become free agents.

James returned to Cleveland that summer, and the Heat then scrambled to keep Bosh by signing him to a five-year, $118 million contract. Wade, who opted out of the final two years and $42 million left on his deal, was re-signed to a two-year, $31 million deal that allowed him to re-enter free agency a year later. After a contract dispute with Riley last summer, Wade then negotiated a one-year, $20 million deal with Heat owner Micky Arison.

Arison, however, was unable to bridge the gap between the two when he met with Wade last week in a last-ditch effort to convince him to remain with the Heat.

Wade and Haslem have played together since they arrived in Miami in 2003, when Haslem made the team after going undrafted the previous year out of the University of Florida. Haslem said he's moving forward as if Bosh will be able to resume his career next season after recurring blood clots cut short his last two seasons.

"I'm just glad to be back," said Haslem, the Heat's career leader in rebounds. "For 13 years, I've been a part of this organization. I've always had my mind set on finishing it this way. Obviously, I never envisioned finishing it without my brother. It's bittersweet, obviously."