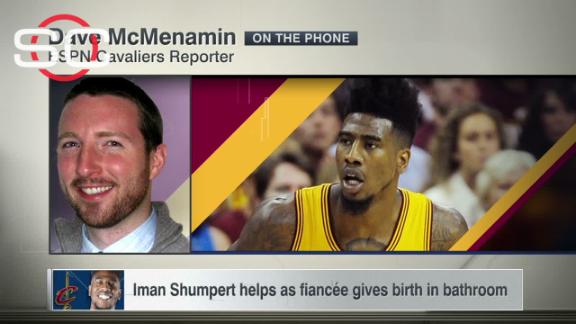 The baby, Iman Tayla Shumpert Jr., was born at 6:42 a.m, according to the post. Taylor nicknamed her "Junie."

Taylor wrote that she did not realize she was in labor until she could feel her baby's head. She said Shumpert used the cord from a pair of headphones to tie off the umbilical cord as the couple waited for the ambulance to arrive minutes later.

The birth came about three weeks before the expected due date of Jan. 16, 2016, which Shumpert previously shared on his Facebook account.

Shumpert and Taylor got engaged in November, with Shumpert proposing to her with a ruby engagement ring on the night of her baby shower.

Shumpert was ruled out of the Cavs' game against the Oklahoma City Thunder on Thursday night with a right groin strain. According to the Cavs, his playing status is questionable moving forward.

Before the 104-100 win over the Thunder, Cleveland coach David Blatt said Shumpert had yet to be re-evaluated by the Cavs since the team returned from Boston, because he was excused to be with his family.

"Due to the recent events, we've allowed Shump to do more important things," Blatt said. "The doctor will get his hands on him, hopefully, [Thursday] evening. Then we'll be a little bit smarter [about his status]. But he'll be down for a few days for sure."

Then Blatt cracked a joke about Shumpert's surprise delivery skills.

"I seen him today for the first time since it happened," James said. "I told him I don't text message those moments. I went in and gave him a real professional grown-man handshake, not the handshakes that y'all see us do all the time. But I gave him a dad handshake and congratulated him on that, and it's pretty cool."