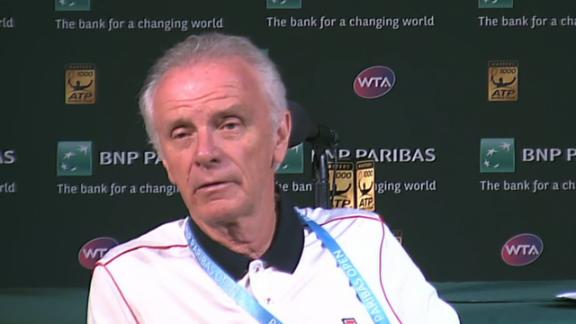 Moore's resignation came one day after he said women players ride the coattails of the men. He later apologized, but his remarks drew widespread outrage.

"I think the WTA [Women's Tennis Association] ... you know, in my next life, when I come back, I want to be someone in the WTA because they ride on the coattails of the men," Moore said Sunday before Serena Williams facedVictoria Azarenka in the final of the BNP Paribas Open. "They don't make any decisions, and they are lucky. They are very, very lucky. If I was a lady player, I'd go down every night on my knees and thank God that Roger Federer and Rafa Nadal were born because they have carried this sport. They really have."

Moore, 69, is a former professional player from South Africa. He was involved with the tournament at Indian Wells for 29 years as an owner and managing partner before he assumed his most recent post overseeing tournament operations and the Indian Wells Tennis Garden in 2012. Years ago, Moore and another former player, Charlie Pasarell, started PM Sports Management, which oversaw the tournament as it expanded.

"Ray let me know that he has decided to step down from his roles as CEO and Tournament Director, effective immediately," Ellison said in a statement Monday night. "I fully understand his decision."

Ellison noted the "ongoing, multi-generational, progressive movement to treat women and men in sports equally" and that women and men have been paid equal prize money at all major tennis tournaments, including Indian Wells, for a decade.

"Thanks to the leadership of Billie Jean [King], Martina Navratilova, Venus Williams, Serena Williams and so many other great women athletes, an important measure of success has already been achieved," he said. "All of us here at the BNP Paribas Open promise to continue working with everyone to make tennis a better sport for everybody."

"Raymond Moore has taken full responsibility for the unacceptable comments he has made," Simon said. "It is the right decision for him to step down. The BNP Paribas Open has supported the payment of equal prize money to all players since 2009. The WTA looks forward to working with Mr. Ellison and the Indian Wells team on continued efforts in making the sport better and equal for all players."

Moore complimented Serena Williams on Sunday while talking about the state of women's tennis. He said Williams is "arguably the best female player of all time." However, he also said, "I think the WTA have a handful -- not just one or two -- but they have a handful of very attractive prospects that can assume the mantle. You know, [Garbine Muguruza], Genie Bouchard. They have a lot of very attractive players. And the standard in ladies' tennis has improved unbelievably."

Asked to clarify whether he was talking about physical attractiveness or competitive attractiveness, Moore responded, "I mean both. They are physically attractive and competitively attractive. They can assume the mantle of leadership once Serena decides to stop. I think they've got ... they really have quite a few very, very attractive players."

"At my morning breakfast with the media, I made comments about the WTA that were in extremely poor taste and erroneous," he said. "I am truly sorry for those remarks and apologize to all the players and WTA as a whole. We had a women's final today that reflects the strength of the players, especially Serena and Victoria, and the entire WTA. Again, I am truly sorry for my remarks."

Williams was among the many who fired back at Moore. She was asked about Moore's comments after she lost to Azarenka in the final.

"Obviously, I don't think any woman should be down on their knees thanking anybody like that," she said. "I think Venus, myself, a number of players have been -- if I could tell you every day how many people say they don't watch tennis unless they're watching myself or my sister, I couldn't even bring up that number. So I don't think that is a very accurate statement. I think there is a lot of women out there who are more ... are very exciting to watch. I think there are a lot of men out there who are exciting to watch. I think it definitely goes both ways. I think those remarks are very much mistaken and very, very, very inaccurate."

Williams said she was surprised to hear sexist remarks such as Moore's these days.

Before the backlash over Moore's controversial comments began, he was asked Sunday how long he planned to remain in charge at Indian Wells.

"Firstly, I love what I'm doing. I'm passionate about it. I enjoy it," he said. "Who knows who the face of the tournament will be down the road. But I don't think that, oh, I'm going to stop next year or three years."

Information from ESPN's Jim Caple and The Associated Press was used in this report.

Indian Wells CEO disparages WTA, female players
Indian Wells CEO Raymond Moore says women players ride the coattails of the men and don't make any decisions, and if he were a "lady player," he'd thank God that Roger Federer and Rafael Nadal were born because those men have carried the sport.