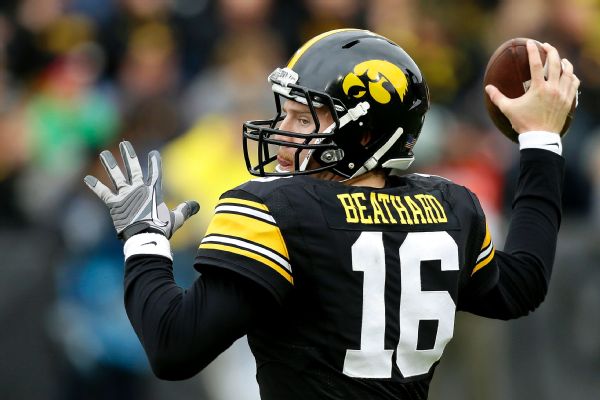 The helmet of Iowa quarterback C.J. Beathard is back where it belongs this week after going for a little adventure in the aftermath of the Hawkeyes' last-second upset victory over Michigan this past Saturday.

Beathard tossed his helmet into the air after teammate Keith Duncan hit a 33-yard field goal to beat the third-ranked Wolverines, 14-13, at Kinnick Stadium. Thousands of fans poured onto the field to celebrate the win and one of them scooped up the stray helmet as a souvenir. Campus police later spotted the fan wearing Beathard's helmet in town and helped make sure it was returned to the Hawkeyes' locker room.

"Our equipment guy told me that one of the cops walking down the street saw a kid wearing it," Beathard told reporters in Iowa City Tuesday.

Iowa coach Kirk Ferentz said head student manager Brock Baumert let him know some of the helmets were missing when driving the coach back to the football facility after Ferentz finished some interviews Saturday night.

"He said the managers were really helping, the student managers were helping after the game, because anything that wasn't nailed down was being accosted," Ferentz said. "So I guess those guys, they deserve gold stars for the week."