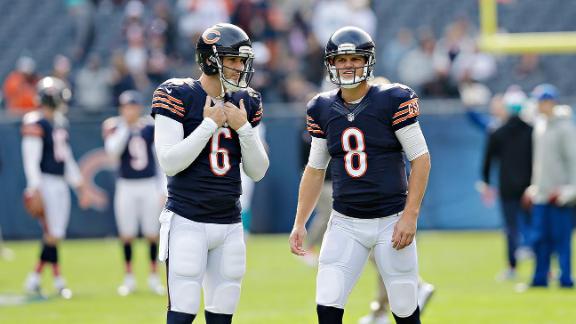 LAKE FOREST, Ill. -- Despite coach Marc Trestman benching him just 14 games into a seven-year, $126.7 million contract, quarterback Jay Cutler hopes to remain with the Bears, but he acknowledged Thursday "it definitely crossed my mind" that he has possibly played his final game with the team.

Trestman pulled Cutler and backup Jimmy Clausen into a meeting Wednesday to inform the quarterbacks of the decision to go with the latter Sunday when the Bears host the Detroit Lions at Soldier Field.

Cutler said he "didn't take [the demotion] well at the time."

"You sign a seven-year deal, and you think you're going to be here for a while," Cutler said Thursday at Halas Hall. "I'm still hopeful that's going to ring true, that we'll have another shot at this. But after this last game, a lot could happen."

Trestman benched Cutler after the quarterback produced a season-low passer rating of 55.8 in Monday night's loss to the New Orleans Saints while throwing three interceptions and generating a total QBR of 6.8, which registered as his second-worst performance of the season in that statistic (6.0 QBR in Week 10 against the Green Bay Packers). Cutler also absorbed a season-high seven sacks against the Saints.

In leading the Bears to a 5-9 record, Cutler has racked up a league-high 24 turnovers (18 interceptions and six forced fumbles).

NFL Insider Adam Schefter first reported news of Cutler's benching Wednesday night, and the team held a meeting Thursday "to cover up what got out yesterday," according to Bears left tackle Jermon Bushrod.

"Tough situation, that's all I can say about it," Bushrod said.

Just 10 days ago, Trestman displayed what seemed to be unshakable loyalty to Cutler, saying, "As long as Jay is healthy, he's going to be playing quarterback for us." Reminded of that quote Thursday, Trestman simply said he changed his mind.

So despite Cutler's status on the depth chart, financially he is sitting in an advantageous position, one the quarterback would trade to retain his starting job.

"I'm still disappointed whether they pay me or don't. I don't like being in this situation. I don't like having to sit up here and answer questions about me not being able to play on Sunday," Cutler said. "I'd rather get paid less and be able to play on Sunday and play at a high level if that was possible. But it's not right now. The security of the contract is nice, but I would trade that for reversing our record and playing better football."

Left guard Kyle Long, one of Cutler's close friends on the team, expressed disappointment about the move, saying the quarterback is "somebody we've all leaned on when we've had some tough times, and he's been able to pick us up. So we're just here for Jay if need be."

Cutler, meanwhile, believes he could play next season for Trestman, with the caveat "we'd have to figure some things out, though, in the offseason, which I think would be easy enough to identify," adding "that's not out of the question, in my book, anyway."

Asked whether he needed a fresh start elsewhere, Cutler expressed a desire to remain in Chicago but admitted to thinking the franchise may not be as committed to the quarterback as it once was.

"I think everyone would. It's a natural response to wonder that," Cutler said. "Whatever happens at the point between after the season in March, or whenever they make decisions, we'll cross that when we get there. I would like to stay here. I really like it here. I love the guys in the locker room I get to play with. Clearly, [there's a] different circumstance now. But going forward, this is where I'd like to be."

Clausen To Start; Will Cutler Be Back?
Michael C. Wright and Jeff Dickerson discuss why Marc Trestman ultimately made the move to start quarterback Jimmy Clausen against the Lions on Sunday, and whether Jay Cutler will be in Chicago next season.