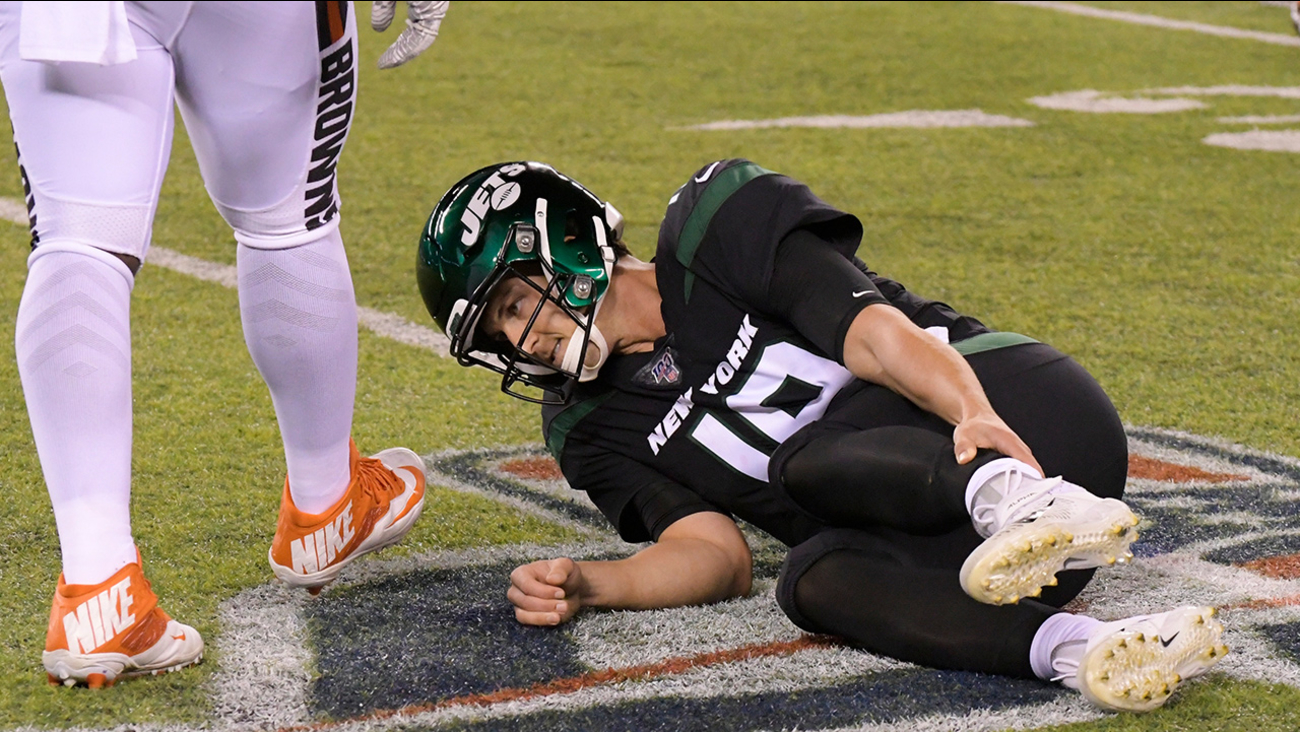 New York Jets quarterback Trevor Siemian (19) grabs his leg after being hurt during the first half of an NFL football game against the Cleveland Browns, Monday, Sept. 16, 2019. (Bill Kostroun)

NEW YORK (WABC) -- The New York Jets have lost QB Trevor Siemian for the season with an ankle injury creating a QB quandary ahead of their game against New England.

Siemian got the start against the Browns on Monday night after starting QB Sam Darnold was diagnosed with mononucleosis last week. He will likely miss several more games while recovering.

Siemian was injured when Cleveland's Myles Garrett slammed into him and fell on top of him. The Browns defensive end was penalized for roughing the passer, but Siemian was done for the game.

An MRI on Tuesday morning revealed the ankle injury was severe enough - ligament damage - to sideline him for the season.

"We're still going through the procedures as far as surgery options," Coach Adam Gase said. "So, obviously, we'll have to address our quarterback position from here on out."

Luke Falk, the Jets' No. 3 quarterback, was promoted a few hours before the game against Cleveland and found himself on the field as the only healthy player at the position.

"Yeah, it's been a weird week," Falk said. "A week ago, I was on the practice squad and then tonight I'm standing in front of you guys after playing in a game."

It certainly was an unexpected development and sent the Jets into quite a quarterback quandary.

New York will likely be in the market to sign another passer or two this week as it prepares to play at New England next Sunday, but the team confirmed Falk will be the Jets starter until Darnold returns to the lineup.

"He's feeling better, but really it's the doctors letting us know when to proceed with him," Gase said.

Gase said the Jets are in the discussions stage as far as potential quarterback signings, with general manager Joe Douglas and the scouting staffs sifting through available players.

"We're just trying to figure out what's best for us, especially for this game, for this week," Gase said.

The Patriots opened as 22.5-point favorites over the New York Jets - according to the betting market, there hasn't been this large of gap between the best and worst teams in the NFL since 1987, a strike season featuring games with starters against replacement players.

The Dallas Cowboys are also 21.5-point favorites over the Miami Dolphins at the majority of sportsbooks.

The Jets quarterback woes come at the same time as the Giants are handing the reigns to rookie quarterback Daniel Jones after Eli Manning's poor start.