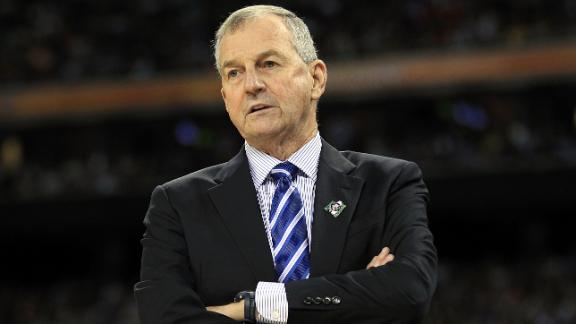 Calhoun, 71, stepped down before the start of last season, after having suffered a broken hip in a bike-riding fall. The defending champion Huskies went 20-14 in his final season, losing in the first round of the NCAA tournament.

He has strong ties to the Bay State: A native of the Boston suburb of Braintree, Calhoun played at American International College in Springfield and coached at Northeastern from 1972 to 1986.

Calhoun, who is a special assistant to UConn athletic director Warde Manuel, told ESPN last week that he is in good health and reiterated that he would not rule out a return to coaching.

When reached for comment Friday morning, Calhoun declined to talk specifically about any interest in the BC job. However, he did not rule out his interest in returning to the sideline.

"I would not be opposed to talking to anyone about basketball," he said.

Later in the day, Calhoun spoke to The Hartford Courant.

"I have not talked to any school and I don't plan on talking to any other school," he told the newspaper. "I never say never, but I am not trying to get a job. I told %5BESPN%5D that I wouldn't rule out talking to anybody about basketball."

Calhoun took over the UConn program in 1986 and won three national titles -- in 1999, 2004 and 2011 -- in 26 seasons at the helm. He was replaced by former Huskies guard Kevin Ollie, who has led UConn to the NCAA tournament in his second season as coach. (The Huskies were ineligible last season due to previous academic improprieties.)

UConn will play Villanova on Saturday for a spot in the Sweet 16.

"If that's what he wants to do, more power to him. I'm always going to support Coach," Ollie told ESPN on Friday. "I know he has a passion for the game, but I also know he's been enjoying his vacations in January, playing golf, so I don't know if he wants to give them up.

"He's earned the right and the respect to do whatever he wants to do, and he has my support."

Calhoun, whose career record is 873-380, is one of eight Division I coaches with more than 800 victories.

Boston College parted ways with Steve Donahue earlier in the week after four years and a 54-76 mark. The Eagles were 8-24 this season, 4-14 in Atlantic Coast Conference play.

Calhoun was also instrumental in ending the BC-UConn rivalry after Boston College departed the Big East to join the ACC.

"We won't play BC after they leave here," Calhoun was quoted as saying in The Courant in 2003. "I have no desire to play Boston College. Not for the fact that they are leaving, but how they did it. I will not play Boston College as long as I'm here.''

Dana O'Neil of ESPN.com contributed to this report.