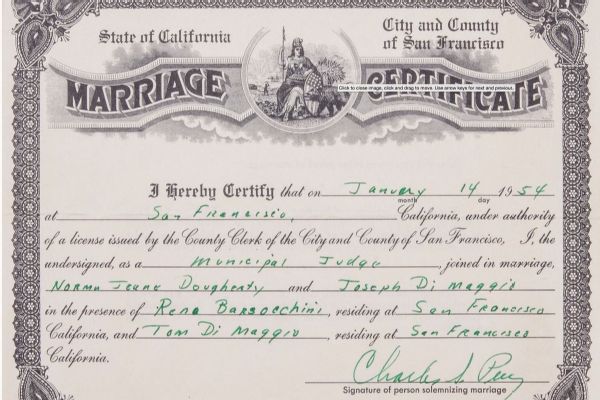 The marriage certificate from Joe DiMaggio's nine-month fling with Marilyn Monroesold for $122,500 on Sunday.

Ken Goldin, founder and CEO of Goldin Auctions, told ABC News the 1954 document was bought in June from a private collector who had acquired it from a DiMaggio estate auction in 2006.

"It is a historic document that ties together the golden age of Hollywood and baseball Royalty," Goldin told ABC News.

DiMaggio, the Hall of Fame center fielder for the New York Yankees, played from 1936 to '51. The "Yankee Clipper" died in 1999 at 84 after a battle with lung cancer.

He married the legendary actress in January 1954, in San Francisco.Monroe died in 1962 at 36 of a barbiturate overdose.