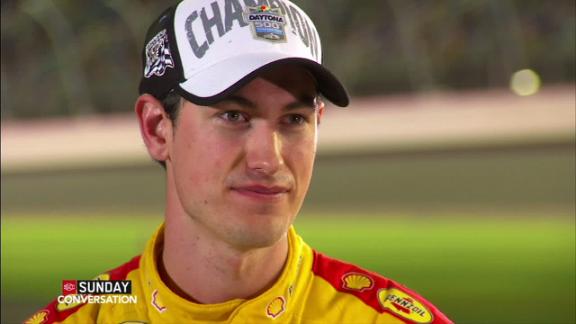 DAYTONA BEACH, Fla. -- Soaked in booze but drinking a Coke, Joey Logano fretted over how he and his new bride would celebrate his most significant victory.

"I don't know how to party," the 24-year-old said with a sheepish grin.

Winning the Daytona 500 will provide him the ultimate chance to unleash.

More than two years after nearly washing out of one of NASCAR's top rides, Logano surged to the front of the sport with Sunday's win in "The Great American Race." The victory earned Logano an automatic berth in the championship race, and ended a rough week for NASCAR marked with multiple wrecks, the injury of a star driver and a headline-grabbing suspension.

Despite all the drama leading into the season-opening race, the event itself was one of the more anticlimactic in recent years despite white-knuckle racing over the final 50 miles. Logano surged ahead of the pack on a two-lap sprint to the finish and had command when a wreck behind him brought out a caution that allowed him to coast to the finish line.

Dale Earnhardt Jr., vying to becomethe first repeat Daytona 500 winner since Sterling Marlin in 1995, stalked the leaders late until a strategic error on a restart with 19 laps left dumped him from contention.

He rallied for a third-place finish in his first race with new crew chief Greg Ives.

"We had a really fast car, maybe the best car here," Earnhardt said.

After the Victory Lane party, during which he was sprayed with champagne, Logano wasn't sure what he and new wife Brittany should do next. The couple was married in December.

"When I first started racing, I wasn't 21, so milk and cookies was my partying. Now I'm old enough," said Logano, who won $1.58 million for first place. "Usually Brittany and I sit down and re-watch the race."

Logano, who has spent seven years trying to live up to impossible expectations, raced to the biggest win of his career as he continued to reward Roger Penske for catapulting him into one of NASCAR's top stars. Nicknamed "Sliced Bread" when he broke into the Sprint Cup Series at 18 because so many predicted him to be the next big thing, Logano found himself searching for a new job after four underwhelming seasons at Joe Gibbs Racing.

Penske snatched him up before the 2013 season, and the move jumpstarted his career. He made the field of four drivers in last year's championship finale, and was in contention until a poor late pit stop.

There's no better rebound from that disappointment than giving the "The Captain" his second Daytona 500 title. Penske, one of the most respected team owners in motorsports, also has a record 15 Indianapolis 500 wins.

After the win, Logano reflected on the uncertainty he had about his future at 22 years old after losing his place with Gibbs.

"Some of the emotions you go through, you start to think, Man, am I going to have a job next year?' That's kind of hard as a race car driver," Logano said. "I poured all my eggs in one basket. You don't know what's going to happen.

"Who would ever guess three years down the road we'd be sitting here saying we're Daytona 500 champions? That's crazy. Life is a roller coaster."

Penske, who last year won the IndyCar championship with Will Power and the owners championship in NASCAR's Xfinity Series, said he never hesitated in hiring Logano.

"It's paid off in spades for us," said Penske. "This is just the start, I think, of a career. He's going to be a guy at the top for a long time."

He's the second youngest Daytona 500 winner in history, behind Trevor Bayne, who was 20 when he pulled off an upset victory in 2011.

It capped a week that began with all the attention on Jeff Gordon, who started in pole position in his final Daytona 500. The four-time NASCAR champion, who is retiring at the end of the year, led 77 of the first 100 laps and a race-high 87 laps in all.

But he was involved in the late accident that helped Logano win. Gordon finished 33rd.

It was a minor wreck, far less severe than the many crashes that occurred over the last eight days at Daytona. On Saturday, NASCAR star Kyle Busch broke his right leg and left foot in a crash during the Xfinity race that has him sidelined for several months.

At the same time he was in surgery, older brother Kurt Busch was before a NASCAR appeals officer fighting to have his indefinite suspension overturned. NASCAR punished him on Friday for an alleged domestic assault on his ex-girlfriend in September, and Kurt Busch spent Saturday in two phases of appeals.

It made Sunday the first Daytona 500 in 15 years without one of the Busch brothers in the field.

Their replacements -- Regan Smith for Kurt Busch,and Matt Crafton for Kyle Busch --had little or no practice time leading into the race. Smith finished 16th, while Crafton was 18th.

Joey Logano Sunday Conversation
Joey Logano joins Marty Smith to discuss winning the Daytona 500 and how it will impact his career. 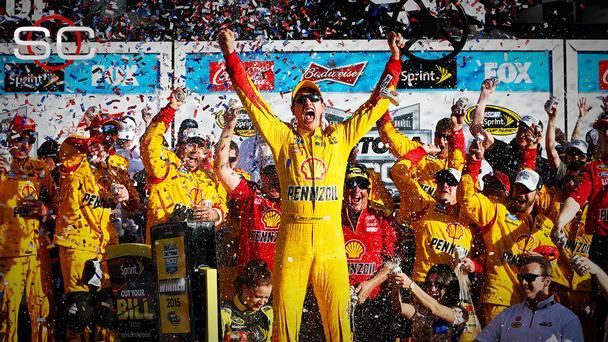 Logano Wins Daytona 500
Joey Logano became the second youngest driver to win the Daytona 500 after a caution came out on the final lap.

Penske Wins Second Daytona 500 As Owner
Joey Logano's car owner Roger Penske discusses what the important factors were for Logano to make it to Victory Lane at the Daytona 500.